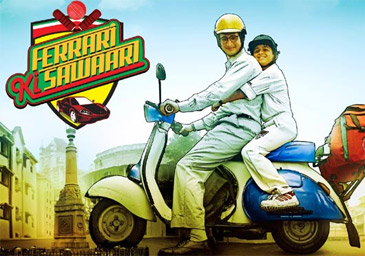 Filmmaker Vidhu Vinod Chopra, who is ready to release his next production "Ferrari Ki Sawaari", says their films get delayed because they don't start the project unless they have a good story.

"We don't make a film unless we are sure that we have a good story. 'Ferrari ki Sawaari' took 4 years. The idea for the film first came when we were writing '3 Idiots'. So we worked almost 4 years on 'Ferrari...', dialogues alone took almost a year," the 55-year-old said here at the launch of a new song of "Ferrari ki Sawaari."

"When we make a film, we very proudly bring it to you. Be it 'Ferrari...' , 'Munnabhai' or 'Chitthiyan' or any other film. So writing a story consumes a lot of time for which we are extremely sorry but you know that we bring a good film," he added.

Directed by Rajesh Mapuskar, "Ferrari Ki Sawaari" stars Sharman Joshi and Boman Irani and is slated for a June 15 release.

Chopra revealed how the great comedian Charlie Chaplin inspired him to zero in on the title.

"We were writing the story around three years back, I had gone to America at that time. At Palm Spring I was living in a house where Charlie Chaplin used to live. There was a small stage in his house where he used to perform for his friends. That was a very inspiring house. I called Mapuskar from there and said I think I have the title and we have to thank Charlie Chaplin for it," he said.