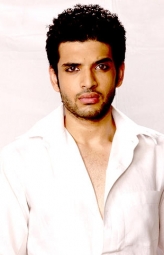 Featured Video
Veeru feels that he is the main reason for the differences between Kunal and Shamoli, and decides to sell off his house to repay the loans and move out. However, the coming episodes will see a major twist in Karan Kundra aka Veeru returning to the show in a new avatar. In the meantime, Kunal feels that he should reunite Veeru and Shamoli, and will try his best to play his cards.

According to our source, "Karan Kundra will be out for 2-3 episodes, but he will be back into the family as the son of the house. The manner in which this will happen is to be seen by all".

Karan Kundra said, "I am not shooting for the show for the past couple of days. So I don't know much. However, I have heard that Veeru will be gone for few episodes, but will be back later on. But I don't have details on the comeback sequence".

Sara_A 12 years ago waiting for ur makeover!!!!don't take too long!

Sara_A 12 years ago all the best karan!hope u don't make us wait too long..

+ 2
12 years ago yay! finally Karan please come back soon :)) and all the best. i too hope u have someone better than Shamoli :))

Sara_A 12 years ago give him someone else other than kanchan n shamoli...someone who can act!

12 years ago spare us and him from this torture...end the show..or cast somebody else opposite him beside mooli or kanchan..

atozZ 12 years ago ok but please don't make the rich veeru chasing after shamoli again, that girl just horrible at acting. I would prefer strong scenes between veeru-kunal-karishma so much more, just in case if they can't find beautiful girl who can act to opposite veeru

+ 7
12 years ago gud to see rich punji back..
nd dont want shamoli as her partner..either kanchan or someone else(kritika kamra)
will be great

+ 2
12 years ago he shud get a better girl for himsel now...sum1 prettier lol