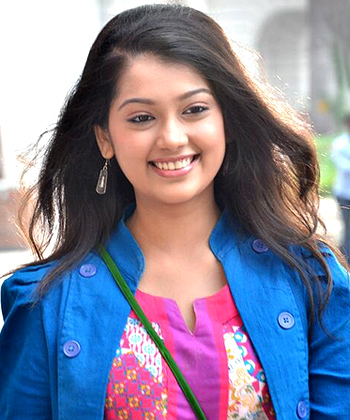 Actress Digangana Suryavanshi, currently seen in the title role in TV Show "Ek Veer Ki Ardaas...Veera", about a special bond between a brother and a sister, says the show has filled a void in her real life.

"I think 'Veera.' gave me an opportunity to actually have a brother because now I tie rakhi to Shivin Narang (who plays character her brother Ranvijay) and call him veerji (which means big brother in Punjabi)," the actress, who is a single child, told over phone from Mumbai.

Being a single child how easy was it to be part of a show about sibling bonding?

"I think it all depends on your thinking. If you don't share the same kind of bond with your co-star, it is very difficult to show it on the screen. When a guy and a girl share the screen, they instantly come across as girlfriend and boyfriend, so it's the bond that you share off-screen that is important," she said.

When the show was launched, child artists Bhavesh Balchandani played younger version of Rannvijay, while Harshita Ojha was seen as Veera and they were applauded for their heart-warming performances.

Digangana, who joined the show after it took a 15-year leap, admits it was difficult to break their images.

"I did not try to grab on what they did because they were too young and Veera was in her 20s after the leap. One changes drastically during this transition. For me, it was looking at the character from people's perspective - what would they expect from Veera?" Digangana said.

The actress, who was also a part of "Qubool Hai", recently attracted bad publicity for attitude problem on the sets of "Veera".

When asked her about the same, she dismissed it as "baseless rumours" and claimed "everybody on the set is good friends with her."

Shivani_4u 6 years ago Karanvir Bohra love u as ARI..Qubool Hai :)

Sukhmani05 6 years ago Digangana Suryavanshi - You Are Adorbs As Veera ... Keep Rocking ... Love you loadzz !!

Sukhmani05 6 years ago Digangana Suryavanshi - Keep Up The Great & Splendid Work as Veera ... Love you loadzzz !!