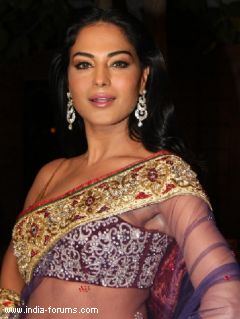 Shooting for a Bollywood flick, 'Mumbai 125 kilometres', at Film City in Goregaon of northwest Mumbai, Malik left in a car after pack-up Friday morning and was not reachable since.

'Veena left after the pack-up yesterday (Friday) morning. In the afternoon, I received an SMS from her where she apologised for not being able to concentrate on the shooting, stating that she was disturbed,' the film's director Hemant Madhukar said.

'I called her immediately, but her number was not reachable. I have not been able to get in touch with her since,' he added.

Malik's manager Pratik Mehta also confirmed the development. 'I have been trying to reach her since yesterday, but have failed. I have approached the officials at Bandra police station and have sought help in finding the whereabouts of Veena.'

However, the Bandra police denied they have registered a missing person's complaint for Veena Malik.

Malik came into limelight in 2010 after she testified against her boyfriend, Pakistani fast bowler Mohammed Asif alleging that he was involved in match fixing.

She then garnered more attention after she participated in the fourth season of reality show 'Bigg Boss 4'.

She has also been condemned by Islamic clerics for her nude photos in an Indian magazine.

The actress is set to have her 'Swayamvar Season 4 - Veena Ka Vivaah' on India's national television, through Imagine TV, which has earlier hosted swayamvars of Rakhi Sawant, Rahul Mahajan and Ratan Rajput.

zoya-shah 8 years ago drama queen and attention seeker is having a gala time in a hotel room.rakhi sawant is million times better than her.

Budtameez 8 years ago PUBLICITY STUNT PAR EXCELLENCE!
#
Like her or hate her, but you have to take your hat off to this wench for coming up with ingenious ideas for publicity stunts!.
#
OR MAYBE, JUST MAYBE [FINGERS CROSSED] THE PAKI ISI AGENTS HAVE KIDNAPPED VEENA AND TAKEN HER BACK TO PAKISTAN TO PUNISH HER FOR TATTOOING ISI ON HER ARM OR WAS IT ON HER LEG OR WAS IT ON HER BUM!. WOT EVA.. LOL.

Mohini19 8 years ago Guys, calm down and don't fight among yourselves. This woman is completely safe. Apparently, she crossed the wagah border to enter Pakistan to renew her Visa.
Oh gosh, when will the general public be spared with the news about her.
This woman is impossible.
Here is the web link for the latest news.
http://zeenews.india.com/entertainment/celebrity/missing-veena-malik-secretly-slips-into-pakistan_102319.htm

-Jahnvi- 8 years ago I hate her to the core and being biased, I can surely say this is just a publicity stunt.

~meh~
If she is really lost, oh well, i hope they find her soon.

Ishradivanluver 8 years ago erm i dont like veena but if she is really missing then lets hope she is found safe and sound inshallah, but if this is one of publicity stunts then no comment lol

saaniakh 8 years ago OMG...wats this? is she really lost or went to hiding?...but how can a celebrity gets lost ??...didn't she had guards with her?...if she is really lost or in trouble than poor her already in mess n now this...though I don't like her but want her to be safe n return safe afterall she is a human being!

Yuvika_15 8 years ago sounds like a publicity stunt for her swayamvar
bt if she is lost thn m hpefully the police wil find her...

shine_bright 8 years ago Really hope they find her !
But on the other hand , she's somewhat of a celebrity sooo she's obvi going to get associated with pulling some kind of stunt ; let's hope it's REALLY not that .

Huma Qureshi Loses Cool; Says She has been 'Unnecessarily ...
17 minutes ago

2020 is Turing Out to be a Fruitful Year for Prabhas!
17 minutes ago