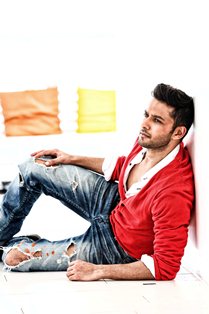 Vatsal Sheth, during the shoot of his ongoing show Ek Hasina Thi, with a few members planned a prank. Troublesome that he is, shooting at wee hours of the night, Vatsal kept on saying that he saw things, heard voices in the vanity van, saw asymmetrical shadows on the balconies and what not. Having set the mood for a scare, he devised an evil plan that would knock the shoes off, of his co-star Sanjeeda Sheikh and the rest of the oblivious ones.

Plan of action, Vatsal asked a member to get a few lemons and injected a few with fake blood and concealed it. Having said a few more things about the after life, he quickly added on that such things to happen in real life and people shouldn't ignore it. The ones who do, are the usual suspects for the "body hunters". They feel challenged by a mortal. Having slyly and thoroughly set the mood, he said that if a deserted soul is wandering nearby, they can find it out easily. They only had to follow a ritual.
The procedure they followed was that of performing a small puja on the lemons and giving one to each. If the lemon changes the color, that means you are haunted.
Sanjeeda Sheikh looked uncomfortable all this while along with a few members, but still she went on with the game because she didn't want to be left out. So, after the puja was performed, they went out of the Set to the ground. There was a car parked nearby and they began cutting the lemons there. After each one was done, Sanjeeda and a set member were the ones to find blood in their lemons. Sanjeeda couldn't control herself and began screaming. Vatsal went to pacify her that such things happen but, Sanjeeda was far from comfort and after a few minutes of fun, he gave in. But, what followed was all the more hilarious. Sanjeeda was shocked to her limits and chased Vatsal with a knife screaming "I'll kill you Sheth, try haunting me then."
9 Likes

Preternatural 6 years ago Sanjeeda Shaikh is a Muslim so why would she believe in "Puja"??

Vatsal Sheth...is the most evil prankster