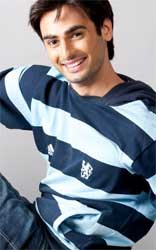 Tellybuzz has already reported on Colors TV's Na Aana Is Desh Laado taking a leap and several names associated with it in the new generation.

The latest buzz is that Varun Kapoor, lately seen in Sony TV and Balaji Telefilms' Bayttaab Dil Kee Tamanna Hain, will be seen as one of the leads in the show post leap.

Our source from the industry says, "Varun will be portraying the role of Bhanupratap's (Aman Verma) son who is now creating a turmoil in Ammaji's life."

"Varun will be impersonated as Rudra in Na Aana Is Desh Laado and as the story unfolds, he will be seen falling in love with one of the daughters of Sia (Natasha Sharma) and Raghav (Aditya Redij)" source adds.

We already know that Simran Kaur (Love Ne Milla Di Jodi fame) and Vaishnavi Dhanraj (CID fame) are playing the female leads of the show and will be the daughters of Sia and Raghav who will be brought up by Ammaji (Meghna Malik) and Amba (Shikha Singh).

If the buzz is to be believed, Varun was also shortlisted for Shakuntalam Telefilms upcoming show on Colors TV, Kudesan, but he preferred to take up Laado. Ironically, Varun was playing the son of Aman Verma in Bayttaab Dil Kee Tamanna Hain and will go on to play his son in this show too..

We tried contacting Varun for his take on the show but he remained unavailable.

ananya2000 8 years ago addii...When you arise in the morning, think of what a precious privilege it is to be alive, to breathe, to think, to enjoy, to love your Coming Lovely Day…..GooD Morning

rimitimi2000 8 years ago Deepest" feelings of my heart while praying for you ,
May "GOD" Convert Ur
Discomforts To Comforts, Ur Pains To Gains,
Ur Minimum To Maximum,Ur Losses To Profits,
Ur Tears To Smiles, Ur Sorrows To Pleasures,
Ur Bad-wishers To Well-wishers, Ur Debts To Credits,
& Ur Good Dreams To Realities!And make these"Everlasting!..
ADITYA REDIJ..lov uuu...

shivani003 9 years ago Lol he wasnt Aman Verma's son on that show!!!!! He was his bhanja (nephew)

Keva 9 years ago Will miss Aditya and Natasha but looking forward to Simran's entry in the show.

Priyanka Chopra praises Sonu Sood as UNDP confers him with ...
15 minutes ago