Juhi Parmar the dutiful Bahu of Television adorned a new avtar in Sony’s Comedy Circus and came out with flying colors as she won the second season of the show along with VIP.

Here is a jubilant Juhi as she talks about her win… 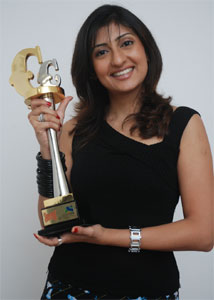 Featured Video
People had always seen you as a typical bahu… What made you venture into Comedy Circus?
Well, I am not a serious person at all. People who know me can explain this in a better manner; I have this funny bone in me and have a great sense of humor. It’s so unfortunate that all consider me as a very serious-minded person. I am glad that thro’ Comedy Circus, I could at least showcase this talent of mine to my fans. Winning was not easy at all, as everyone out there were very good. It was a healthy competition throughout and I am happy that all ended on a good note for me.

Did you ever imagine that you could go so far in Comedy Circus and eventually win it?
Not at all, as the initial few episodes were tough. I entered only to go out. I was very ill at that point of time, but I did not want to gain sympathy. We were under-rehearsed and I thank my stars that we got back thro’ Wild Card which opened up another opportunity for us.

What is the best attribute in your partner VIP?
The best thing about VIP is that he is very patient; he takes everything very nicely and as a partner I would say he was the one who can create some 135 voices which is an amazing talent to have. Leave alone actors, he can create various sounds too.

Were you in some sort of pressure when you were paired with VIP, who was part of last year’s finalist Jodi too?
Not at all, because I thought it will be easy because he was aware of the format and he will come with a clear vision as to which act will work and what will not. Also, I think VIP too has changed a lot now; he used to mug his lines and as an actor, I used to tell him to just get into the character, and even if we forget the lines it won’t be difficult for us perform the act. 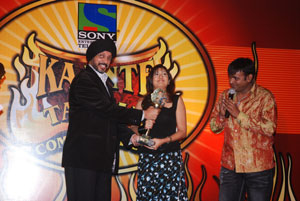 Any memorable moment you want to share?
Every moment of Comedy Circus was memorable for me. The best has to be the kind of marks I got, and the manner in which the judges used to compliment us...It's ringing in my ears even now!!

You have been into acting, singing, dancing and comedy too. What do you like doing the most?
I love each and every phase. As an actor, I try my best to experiment with different genres. I get bored very quickly, and for me, variety is the way of life. In terms of reality shows, I have not repeated myself just for the sake of participating and gaining money.

7 years and going strong in Kumkum… Don’t you get bored there?
Ya, its been a long journey in Kumkum, but I have done nearly 6-7 different characters in that one serial. I was playing a 55 year old woman and the story was a drag at that point of time. So I clearly told the creative that I will leave the show if there is no freshness incorporated. But they supported me and brought in the reincarnation track and we all are enjoying this phase now, and so are the viewers!! 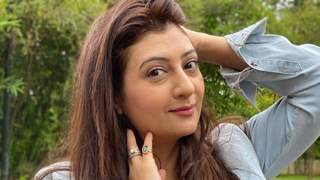 + 5
13 years ago she was goods ..but it was quite obvious that this pair will win..coz VIP was there and last time he came runner up so planned to make him win...

13 years ago congrats to her
she is really versatile actress

13 years ago thanx!
wish her all the best in saas vs bahu!

13 years ago great..ending is spoiled now ..
congrats to juhi vip though

13 years ago heartiest congratulations to juhi. she totally deserved to win!! she's surely the most talented and versatile actress on tv. way to go juhi!! love you and wishing you all the best in all your future ventures. and keep rocking as kumkum!!!

+ 7
13 years ago She rocks, and Sumit-Kumkum romance is always refreshing !!

+ 4
13 years ago Congrats to Juhi and Vip for CC winner. I also get bored easily, and agree with her that variety is the way of life. Thanks for the wonderful article of Juhi