Finally, the moment has arrived for which Vansh (Rohit Khurana) had been waiting for in COLORS' Uttaran, but his wedding to Ichcha (Tina Dutta) does not look simple anymore, just because Vansh has got to know that his brother Veer (Nandish Sandhu) too is in love with the same girl. 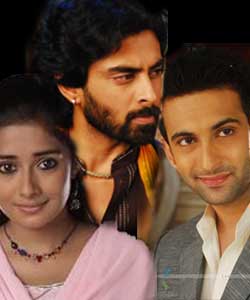 Now the next high point that the viewers can look forward to, is the moment when Vansh will break his silence and his emotions burst out as a volcano.

According to our source, "Vansh would go thro' the entire marriage rituals in complete trance mood, and would give words to his thoughts only on their wedding night".

"Also Vansh's possessive attitude towards Ichcha will change, and her very presence in his life will start hurting him more", adds our source.

We tried to contact both Nandish Sandhu and Rohit Khurana, but they echoed the same saying, "We are as of now shooting for the wedding rituals, and are unaware as to what will happen next. But going by the scenario we are presently in, viewers can surely look forward to high voltage drama".

For the uninitiated, Vansh had earlier narrated a story to Ichcha about a girl Kesar who was caught between two brothers. He had also mentioned then that the husband of the girl ends up killing her lover, which results in the girl killing herself.

If we relate the present track to the above tale, then viewers could presume that there could be at least one of the character's exit happening in the show. However, it is heard that the creative team is planning for a big high point and are still undecided on how they want to play with their characters.

Having said this, since Ichcha and Veer's liking for each other seems to be the eternal love story, there is every possibility of Vansh being the odd one out here.

But as of now, our source confirms that, "Vansh who has been portrayed as a possessive lover till now will turn hysterical, and start hating Ichcha, so much so that he would even start causing physical trauma to her".

Well, this is what happens to a man when he is madly in love with a girl!!!

Yuvika_15 10 years ago vansh and taps need to die..and thn veer and icha can live happily eva after

sara_vansh 10 years ago my bf is same like vansh in real!!
uf plz tapu get out of uttaran um so sick of u ..

PS12345 10 years ago sucks! Last day i am gonna watch this shit. Gives me acute headaches, this plot. Its worse than scary movie or american pie. If you guys are wise you'd stop watching too. Lotsa serials out there with feel good, happy plot. Why dip yourself in misery.

rashi85 10 years ago i wudnt blane nani an tapasya at alll only..
ichcha is the biggest culprit here..acting like one saint....this is called apne pair par kulhadi maarna!!!

viewers are fedup of this drama already..and if they even think of making veer's exit...BYE BYE forveer!!!

A-HELPING-HAND 10 years ago all this is happening because of nani and tapasya. i hate both of them. they shud be kicked out of the show.

LimitLessFan 10 years ago this show gets so much bashing for its negitivity and disgusting creepy story line but amazing its No.1 in TV shows ... god help ppl

exclusive
Exclusive Barun Sobti on being away from TV: My problem is the ...
a minute ago

exclusive
Exclusive Jaan Kumar Sanu on keeping up with Bigg Boss 13, looking up ...
18 minutes ago

Subuhii Joshii loses weight all by herself
25 minutes ago