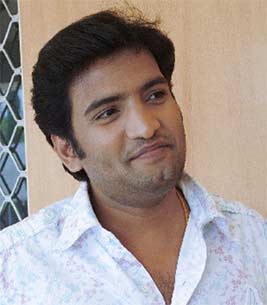 Tamil comedian Santhanam, who is playing the lead role in upcoming action-comedy "Vallavanukku Pullum Aayudham", says he agreed to do the film for the sake of his fans.

"I'm doing the film for my fans. They've been asking me to play a hero for quite some time. But I've never been interested in playing the lead roles because I'm more comfortable doing comedy. Moreover, if you have to be a hero, you need to dance and fight," Santhanam told IANS.

"Vallavanukku Pullum Aayudham" is the Tamil remake of Telugu blockbuster "Maryada Ramanna". Santhanam felt he was apt for the remake.

"I was waiting for a story that I should enjoy doing. I happened to watch 'Maryada Ramanna' and realised that audiences will accept me as a hero in this film's remake. I thought I would be apt to work in the film," he said.

Santhanam, who is confident about the film, will introduce newcomers with the project.

"My producers asked me how come I'm working with so many newcomers. I told them that everybody can make a successful film with stars and popular actors, but the true success of a film is celebrated when it involves fresh talent," he said.

"Most of the technicians in the film are my friends. I was confident that I can succeed with the film, so I decided to rope in friends who were struggling to find a strong foothold in the industry," he added.