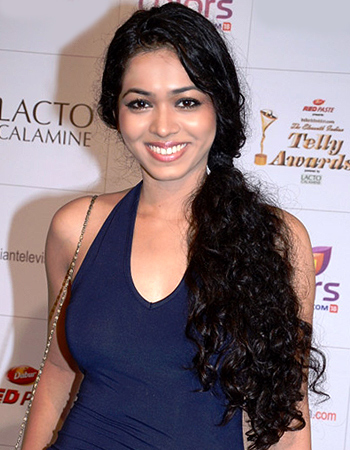 Vaishnavi Dhanraj was last seen in Colors show Madhubala - Ek Ishq Ek Junoon in a small stint and now the actress is all set to enter Star Plus Mahabharat as Bheem's wife.

The actress is having a wonderful experience shooting for her first mythological show, "Yes I'll be playing the character of Hidimba who falls in love with Bheem. The story will portray of how Bheem kills Hidimba's brother of in the show. I've finished shooting for the serial and it was a wonderful experience as this is my first stint in a mythological show," says Vaishnavi.

Vaishnavi was not that keen to portray this character but later made up her mind to do so. She says that while experimenting with her looks in the show, the second look will scare the audience, "Initially I was skeptical of playing this role as its of a demon but later I was convinced by my friends that being an actor I should go ahead and do this role. I agreed to do it as she was portrayed in a human form for which I took four hours to get ready. Though I also have a demon look in the show twice and to get ready for the same, it took me seven hours. The second look is very scary."

When asked Vaishnavi about any other shows she is looking forward to act in, she says, "Talking about Madhubala actually it was suppose to be a full-fledged role but I don't know why was it ended. About doing any other show, yes there is something in the offing but till it gets finalized I wouldn't like to talk about it."

Let's see whether this track will fetch more ratings for the show or not! Till then keep reading TellyBuzz.

vrashali10 6 years ago
good news. vaishnavi is a talented actress. you were awesome as tasha,janvi,nisha n riya.now hidimba all the best.

CHAVI5050 6 years ago Vaishnavi so happy u play Hidimbaa super Mahabharat awesome... u as janahvi in Na Aana is Desh Laado super.

jmoyee200 6 years ago mahabharat no 1... waiting for Bheem's wife Hidimbba ...u also rocks in Na aana is desh Laado show..

ananya2010 6 years ago All the Best to you.
Madhubala EIEJ Rocks. Drashti and Vivian rock.