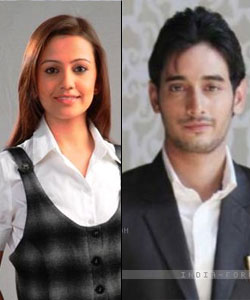 Colors' Mukti Bandhan will see relationships getting entangled in the coming episodes.

Last week we saw Vaibhav (Siddharth Arora) declaring his love to Sabina (Nazneen Patel). And with this we will see the love story of Vaibhav and Sabina getting a kick-start.

On the other hand, I M Virani (Shiv Subramaniam) has announced that Vaibhav and Devki (Esha Kansara) will be getting married soon. The wait is for Vaibhav to get back with his decision, as he is for the first time thinking from his heart.

And finally Vaibhav decides to tell it to the family.

Our source gives us details on the proceedings of the track "In the coming episodes, Vaibhav will announce his love for Sabina to the family for which I M Virani will be expressionless in the beginning and reacts in an acceptable manner later on. But after that he tells separately to Charulata (Surbhi Zaveri Vyas) that no actress can become I M Virani's daughter in law, thus indirectly putting Charulata in a state to come up with a solution."

"Devki will be seen agreeing for the wedding after a long contemplation. Further, she will be called to I M Virani's office where I M Virani will be on the verge of giving her the post of the Co-Managing Director of Vaibhav Industries. On the contrary, she will reject the offer saying that she wants to take the legacy of her grandfather Bhavanji Bha further, and hence has decided to join his firm. But she clearly states that if at all Vaibhav Industries needs her  at any moment, she will be there to help them", adds source.

Will I M Virani be happy with Devki's generous offer? Will he see to it that Vaibhav and Sabina are separated in the future? What will be his next move?

Watch the coming episodes of Mukti Bandhan to know all the answers!!!

10 years ago both ladies r pretty

10 years ago i really don't care abt this lead actress, if, she really is. i kinda like vaibhav with sabina...i dnt knw y u guys are complaining. i just hope i get 2 c them regularly until i start my college and thereafte....who cares whether he is with devki or sabina???

10 years ago rather than showing an actress as a stupid girl who runs behind her dream man or like the usual stupid love triangles and the red dupatta,,this story is with an element ,and the most striking is the lead actress is not a stupid woman who cries for 1000 episodes but is a strong carrier girl and an inspiration to todays youths.................my thumps up

This sounds super exciting. I wish IMV had one more son n we cud have had Devki married to him and Vaibhav to sabrina