View Profile
UTV Motion Pictures has joined hands with one of the greatest actors of Indian Cinema - Kamal Haasan - to remake one of UTV's most acclaimed movies A Wednesday!. The movies, Unnaipol Oruvam (Tamil) and Eenadu (Telugu) are directed by Chakravorthy Toleti and produced by Raajkamal International and UTV Motion Pictures. They are scheduled for an 18th 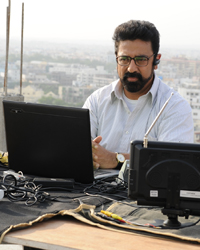 The plot of the movie is the narrative of a common man who takes it upon himself to purge the society of terrorism. It is the story of certain events that unfold between 6am and 6.10 pm on a particular day – events which do not exist in any record but which deeply impact the lives of those involved.

The music for both the Telugu and Tamil versions is by Shruti Haasan. Unnaipol Oruvam, in Tamil, stars Kamal Haasan, playing the role originally enacted by Naseeruddin Shah. The Malayalam superstar, Mohan Lal, plays the role of the Police Commissioner in the film, which was enacted by Anupam Kher. The Telugu remake, Eenadu, stars Kamal Haasan in the same role and Venkatesh plays the role essayed by Anupam Kher.