View Profile
Everyone must be wondering where did Urvashi Sharma go after one movie? Well, Urvashi is back and that too with 2 films in her bag. 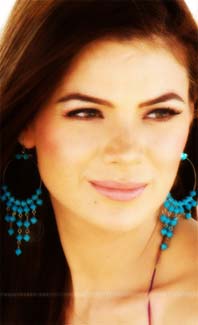 Featured Video
seen in the Abbas-Mustan's devastating 'Naqaab' with Akshaye Khanna and Bobby Deol, she didn't arise with anything else instantaneously. Well the reason for that was because she was beneath agreement with Kumar and Ramesh Taurani. Furthermore, the actress trashed such rumours and assured, "My contract didn't forbid me from accepting films from other banners".


Until her contract ended, the newbie continued to do commercials however now she is ready to make a come-back with 2 first-class films.  The first one is, 'Chashni' which includes actors such as Jaya Bachchan, Ayesha Takia Azmi and Raveena Tandon and the other is titled as Baabarr in which she acts the role of a Muslim girl who lives in Kanpur. "I'm really happy that I will be doing two to three good films soon," said the actress eagerly.


Urvashi came from New Delhi to Mumbai with eyes full of dreams. Urvashi admitted, she found it tough living in a city where she didn't have friends. "I just learnt to keep my head above the tide and keep swimming," says the Naqaab female lead.


She spent her free time in gym and doing power yoga. The approximately 20 year-old actress was patient and waited for things to get better. "I'm neither insecure nor unhappy," said the actress confidently.


In addition, Urvashi added, "I'm sure everyone has a period in life where they just have to sit it out and wait for the tide to turn. Isn't this what they call destiny?"