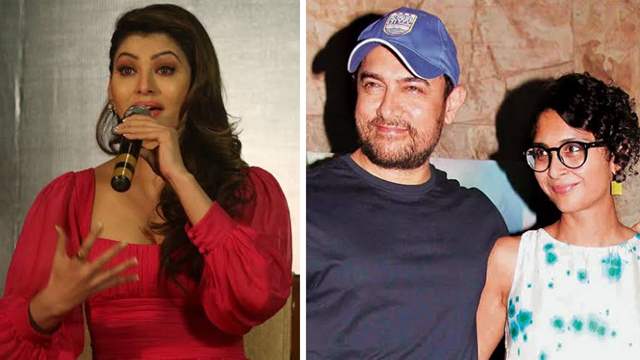 Recently, Bollywood’s Mr. Perfectionist, actor Aamir Khan announced his divorce with wife Kiran Rao. After fifteen years of marriage, the duo has decided to part ways amicably. They have a son named Azad Rao Khan together.

The news of both getting divorced has already put the B-town industry in shock. Many celebrities and well-known face have given their opinion on it.

Bollywood actress Urvashi Rautela, who has been taking over everyone's heart with her pictures on social media, was recently asked about her take on Aamir Khan and Kiran Rao’s divorce.

To which, Urvashi Rautela replied that she won’t be commenting anything on this as the matter belongs to their personal life and she doesn’t want to interrupt anyone's privacy which clearly shows that she respects their decisions and wish them the best for their lives. She chose to not comment on it and the video has been going viral on the Internet.

On Saturday, Aamir and Kiran released a joint statement and revealed that they had been living separately for sometime and now they have decided to officially part ways with each other. However, they will continue to co parent their son Azad. An excerpt of their statement reads:

“Now we would like to begin a new chapter in our lives - no longer as husband and wife, but as co-parents and family for each other. We began a planned separation some time ago, and now feel comfortable to formalise this arrangement, of living separately yet sharing our lives the way an extended family does. We remain devoted parents to our son Azad, who we will nurture and raise together.”

Aamir Khan and Kiran Rao had tied the knot in 2005 and welcomed their son Azad in 2011 through surrogacy.

Besides, speaking of Urvashi Rautela’s professional front, she will be making her Tamil debut with a big-budget sci-fi Tamil film in which she will be playing the role of a microbiologist and an IITian, and later she is going to appear in a bilingual thriller “Black Rose” along with the Hindi remake of “Thirutu Payale 2”.

Urvashi will also be seen in a lead role in Jio studio's web series “Inspector Avinash” opposite Randeep Hooda, which is a biopic based on the true story of super cop Avinash Mishra and Poonam Mishra.