View Profile
Urvashi Dholakia is back on the small screen, finally putting an end to her hiatus. She will be seen as Karishma Mehra on Sony TV and Balaji Telefilms' Bayttab Dil Kee Tamanna Hai, which launches on October 6th at the 10 PM slot from Monday to Thursday.. 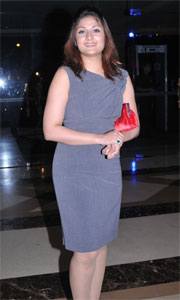 Featured Video
If at all Urvashi's appearance on a truth-telling reality show had any effect on her, then it's just that it has made her all the more bold. Looking fantastic in a grey dress with a shockingly contrasting magenta pumps and a matching clutch, Urvashi declared she is happy to be back on the Balaji bandwagon.

With seriousness being the prime note in her voice Urvashi stated, "My conscience will have never ever allowed me to drift away from Balaji." She further states, "I was doing daily soaps continuously for ten years. I couldn't keep on reinventing myself through my characters, which is why it made sense to me that I take a break."

Not resisting her naughty side Urvashi elaborated, "I love my job. I keep getting roles, where I can make people dance to my tunes. I get paid to boss around people. It's fun!"

Talking about her character Karishma Mehra in Bayttab, she says without blinking, "The three sisters Kanchan(Priyamvada Kant), Shamoli(Sumana Das) and Kakon(Pragati Chourasiya) are hired as domestic help at my place. And I'm their torturer."

When questioned whether her Karishma bears any resemblance to her epic making role 'Komolika,' Urvashi replied, "Well, for that you will have to watch the show."

But Urvashi simply wasn't allowed to leave with such an incomplete answer. She was grilled again regarding her costumes. She was asked whether she will be donning spaghetti strapped blouses and sarees like Komolika, to which she simply said, "No there are no saris in the plan, at least for now."

Well let's see if Karishma too rocks the nation as Komolika…

13 years ago the real vamp of television is back!

sweetnaddu93 13 years ago she's superb vamp in tellywood....love her acting!!!..

+ 5
13 years ago
I Just Loved her as Komolika, She is minblowing, One of the best Vamp Ever !

Can't wait to see her on Bayttab

+ 8
13 years ago Glad Urvashi is coming back. She did brilliant job on kzk. Wish her all the best for her new shows.

13 years ago She is my favorite vamp