The biggest fright game on Colors' under the aegis Fear Factor- Khatron Ke Khiladi x 3 that is yet to go on air on 6th September; here's tellybuzz bringing you the exclusive eliminated contestants list. 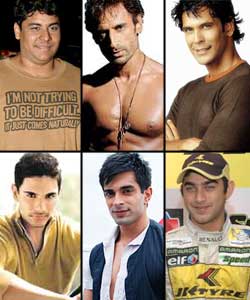 As per our knowledge the shoot for the show was scheduled to take place for duration of 25 days but the latest buzz is that few of the contestants have packed their bags and have landed back in India.

Our source also adds that, "Armann Ibrahim was forced to quit the show due to his prior scheduled car race and Madhura Naik who was last seen in Dil Mil Gaye will be seen as his stunt partner in the show. Also Karan Singh Grover is back in India but will be resuming shoot for his Star One's show Dil Mil Gayee post 8th September."

Also it seems that the sizzling and gorgeous host of the show Priyanka Chopra has stood by her words that this time the stunts and fear in the show would be 3 times difficult.

As our khabroo tells us that, "Due to rigorous stunt line ups on regular basis many of the celebrity contestants have fallen ill and injured themselves in the process; Karan Singh Grover and Dino Morea are still unwell."

10 years ago awwww!! armaan ebrahim has to leave d show bcz of his race ....thats bad..... i thing agar race ka maater nahi hota then he wud hv won d show for sure....
he is just 21 and sooooo deserving winner.....
koi gaal nahi armaan...u r rockstar in r race track....
best of luck
love ya loadssssss

sanky13 10 years ago u did a gr8 job at the "aag ka dariya" stunt man too difficult but u proved urself..

Alice.Cullen 10 years ago Will watch this show !! Will give it a try !!