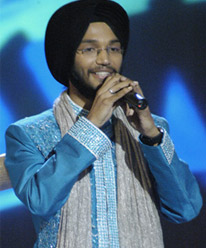 After the unexpected elimination of Prajakta Shukre last week from the reality show, Jo Jeeta Wohi Superstar, this week’s episode has more surprises in store for its viewers.

Keeping in mind the season of monsoons, the theme for this Friday’s episode was aptly Baarish. All the performers aimed at giving their best but the judges were not impressed by most of their performances. They even reprimanded the contestants. Vineet Singh, who, yet again, gave a mediocre performance somehow managed to salvage the situation as he sang a duet, Mere Saanson Mein, along with special guest of the evening Udit Narayan on Saturday, thus earning the title of Superstar of the Week. Seems like the presence of a well-known singer brings out the best in Vineet!The melodious Udit Narayan spread his charisma and shared the stage with all contestants..

14 years ago not sad but definately shockd that ishmeet got eliminated...what happened 2 his punjabi fan-following?

didiheyheyhey 14 years ago i hate harsheet and he needs to be out, not Ishmeet

smartleowalo 14 years ago yap its great that ishmeet is out and rahul and vineet r save yuppy!!!