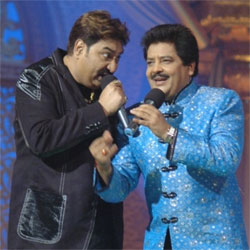 Udit Narayan, the winner of various playback singer awards is now busy judging Sony's Waar Parriwar. But ever since he has been sharing the judge's position with Kumar Sanu, something seems to be eating him up.

Instead of commenting on the performances of the contestants he inevitably makes remarks about Kumar Sanu and how the Bengali is making him kangali!! So, do we take it that he is developing a severe inferiority complex? While poor Kumar Sanu himself has been pushed into the wings by the younger lot of singers, now he is being accused of stealing the limelight from Udit. But Kumar Sanu has been a sport and has never taken offence at Udit's remarks. Instead he chooses to show camaraderie and ignore Udit's comments.

Wonder if these judges would any day stop creating controversies and concentrate on giving more attention to the contestants.

LeadOxide 12 years ago They both are great singers, I personally respect both of them and hold them in high regard

mintyblue 12 years ago I like udit jee's singing more than kumar sanu's and frankly speaking, they both look the same in the photo! and their FATE is similiar- they are both overtaken today by shaan, sonu and KK what's the point of fighting among themselves?

knkanita 12 years ago What was started as a favorite great show was mismanaged heavily by judges & producer Gajji himself. Another example of how a show should not be.

pallavi25 12 years ago All these celebrity judges have such huge egos....lolz They are obsessed with themselves.