This week two new musical reality shows have started in two different channels, Star Plus and 9X, to give company to Zee SaReGaMaPa L'il Champs. After watching all three shows, one thing was sure - the viewers were left spell bound and at a loss of words. If Soha Ali Khan in Zee L'il Champs mesmerized all, then in SVOI Chhote Ustaads, it was Shreya and the little kids in the company of Kunal and Pritam who did it, while in 9X, it was the incapability to understand the concept and all that talks by Simone Singh, which left viewers flabbergasted and at a loss of words. 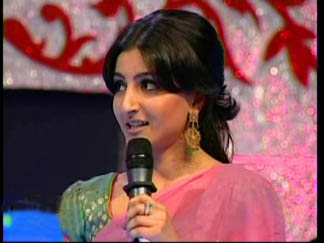 Featured Video
In Zee SaReGaMaPa L'il Champs, there were two eliminations to make up for no elimination last week. Two popular kids Sagar and Vaishali got eliminated. There were some power packed performances and Amir stole everyone’s heart with his “Teri Deewani” so much so that Sonu went up to him to give him a hug and a kiss. Rohanpreet’s Punjabi style birthday celebration was another highlight – it was totally unique. Soha Ali Khan impressed everyone with her vivacious and yet down to earth nature. The viewers could hardly take their eyes off her. She was such a brilliant guest making the participants feel so cherished and wanted. 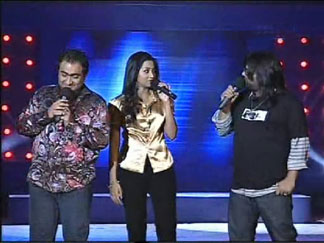 The Star Voice if India “Chhote Ustaad’s” kicked off without a host and the judges played the role of hosts. Between the three, Shreya was most impressive. The atmosphere in the set was very pleasant and very positive. The pranks, the songs and the interactions were pleasant. While Kunal seemed a bit loud and “Put On” in his presentation, Pritam seemed uncomfortable and feeble. As per the announcement by these three judges - Kunal, Pritam and Shreya, the new host will take over next week and he will announce the show format and from their hints, it seemed like the decision for selections of winner would be a combination of public votes and jury’s decision. 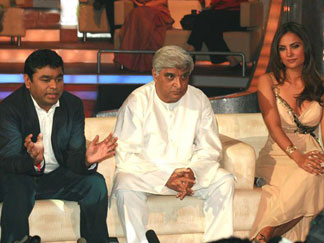 Mission Ustaad of 9X opening show was a big disappointment. In their effort to convey the socio economic objective behind the show, some how in between all the talk, it lost its viewers completely. Viewers are as ignorant about the concept as they were before the show. The cause is noble but the format in which it will be executed was not at all clear. The three judges – ARR, Javed Akhtar and Lara Dutta although all talked a lot, but it was not clear what they expected. The show seems more like a remix of a political campaign and Oscar curtain raiser interspersed with some musical entertainment and looked very unlike a musical reality show. If it has managed to create any awareness so far - it has managed to put off the viewers. The 4 selected jodi’s are impressive, but hopefully from next week, we will see more of musical action rather than Simone wanting their reaction.

14 years ago OH NO! more reality shows! how many are they gonna have now??

+ 3
14 years ago Soha was simply awesome in SRGMP. She is a natural, just mindblowing. Chhote Ustaad has some very good talents and the judges were such a welcome change.Lets hope Gaj ji keeps it simple like this....

+ 3
14 years ago Soha was just too good in the show, she spoke so well and was so, so encouraging towards the children too... it was a great episode, but really upset Sagar got out :( :(

Thanks a lot for the article!!

but i think singing wise Chote Ustaad is better the Saregamapa..