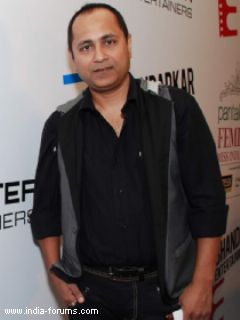 Filmmaker Vipul Amrutlal Shah, who started his career with television show "Ek Mahal Ho Sapno Ka", says TV has become such a popular medium that it is attracting film stars in a big way.

"Television is becoming bigger and bigger and one cannot ignore the fact that it is completely a family medium. Everyone sits and watches their favourite show together. The increasing popularity of the medium is the reason why people from silver screen are coming on TV," Shah told IANS.

Shah, known for directing "Waqt: The Race Against Time" and "Namastey London" and producing "Singh Is Kinng, is making a comeback on the small screen with the new show "Bhai Bhaiya Brother" as a producer.

He was here at the launch of the show along with co-producer Deven Bhojani and the cast.

Deven, popular for his role of Gattu in "Baa Bahoo Aur Baby", says he is happy about producing the show and is satisfied with the work he has done.

"It would be great to work with my friend Vipul. I thought I don't fit into any of the roles in the show so I am not acting in the show. I have done quite a lot of roles and I am satisfied but I will definitely continue acting maybe in some other show," Deven told IANS. He had directed popular sitcom "Sarabhai vs Sarabhai" in 2005.

"Bhai Bhaiya Brother" is a story of three brothers who after staying separately for 15 years decide to reunite and stay together as a joint family with their wives and children.

Directed by Rajan Wagdhare, the show goes on air June 4 on Sab TV.