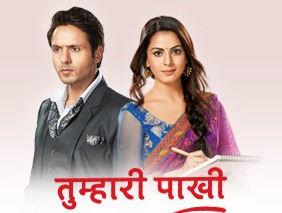 Even as the newly launched show Tumhari Paakhi on Life OK with Iqbal Khan & Shraddha Arya as the main leads garners appreciation for its unusual concept and presentation, there is news that the show is supposed to run for limited episodes only.

Says our source, "The show Tumhari Paakhi produced by Shashi & Sumeet Mittal is a fixed 100 episodes format show. The story which will follow the original novel Naba Bidhan by Sarat Chandra Chhatopadhyay has a fixed script and the makers are going as per the same. The show should wrap up by March end and 28th March could be the last episode."

"The show also has lots of outdoor shoots and due to the fixed format and locked script many of the future episodes too have been shot in advance whereas the permanent set of the inside of a grand house is set up in Film city," concludes our source.

While no one from the channel was available for comment, producer Shashi Mittal without giving away a fixed date accepts that it is a fixed episode show and says, "Yes, Tumhari Paakhi is a show which has a definite end to it and it will not go on and on. It depends on how we narrate the story but I can't say whether it will be 100 or 120 or 140 episodes. That is how the channel had commissioned it and we have developed it similarly."

And going by the way it looks on screen and the response it is getting from the audience, the makers sure seem to have done justice to it.

CharuRuchi 6 years ago It is an awesumm..so i m jst loving it..!!
D main actors r awesumm...dey do complete jst to der roles...love der acting..!!
Wish it could last fr long...!

imdudehead 6 years ago awesome show, i wish it was longer (But not dragged)

mrinzi810 6 years ago Iqbal Khan and Shraddha Arya are doing a great job. It's a wonderful call by the PH to keep a limited episodes show!
Tumhari Paakhi is a fantastic show!

jakr 6 years ago very nice show though we never want it to end but unnecessary dragging is also not welcome. enjoying the show

-Inferno- 6 years ago The show hasn't even started and they want to wrap it up?!
It's so good and for once very refreshing

lara3110 6 years ago Very refreshing concept and it is sad that this unique show will have a short run. But why cant it go on and on. One of the best shows after a long time.

arhi_78 6 years ago Very good thought than the mindless episodes that run for years. This show will last forever in the minds of viewers
and can be watched again and again.

Angelicprinces 6 years ago I love watching Tumhari Paakhi.Love Iqbal Khan love his expressions!! He acts through facial expressions & that too so brilliantly!! big fan since KYPH

RagSia 6 years ago Wow.
Nice try!
N it does look fab whenever I catch it!

Urmila Matondkar Does Not Regret, But Ready to Apologise for ...
13 minutes ago

Shabana Azmi speaks about recovering from her Devastating ...
36 minutes ago

Who is AK in Sushant's Unseen Video that has Surfaced? Watch ...
40 minutes ago