After so many speculations on Star Plus' Tuj Sang Preet Lagayi Sajna going off air, we give you exclusive news that the show will now be shifted to the afternoon slot of 1 PM. And as reported by Telly Buzz, Endemol's Sabki Laadli Bebo will be taking the 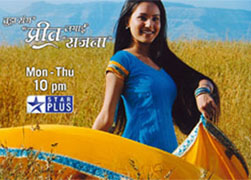 According to our source, "Tuj Sang will be shifted to the afternoon slot of 1PM from 16th March and it will be replacing Kumkum which ends on 13th March."

When asked the reason, our khabroo adds, "TRPs are not really showing a good sign, so the creative team decided that it was better to take an afternoon slot rather than an early evening slot".

We contacted Pooja Bose who said, "Yes, even I have heard about the show shifting to afternoon slot but have not got any confirmation yet."

Earlier, we had reported that Tuj Sang was served two warnings by the channel to deliver better numbers, and this move indeed looks like the last chance the Balaji Telefilms' show is getting!

We tried getting a confirmation from the channel, but we could not get any response..

So for fans of the show, guess this is still a good news as the show is at least on air!! What say?

13 years ago i''m surprised at this decision. I was convinced this show was gonna get axed.

yamini lovs ksg 13 years ago i like the show.i think the male lead is very cute n appealing
storyline can develop if taken good care.
hoping best for the show,i will still view it,even in afternoon slot

13 years ago i kind of like this show ... the lead pair is gorgeous ... they can do something to make the story move faster but it is not as bad as many otherss

13 years ago whats with the time change so soon aswell. get 2 tel you star plus is losin good show kumkum goin off air now this.

13 years ago How Silly?
How can they shift the show so soon & easily to afternoon band?
Afternoon bands are not that appealing & prosperous already... & when the show will be going to noon slot,it might even loose its current viewers!
Therefore it will loose its TRP''s & then Star Plus will send it Off-Air!

ab how can Star Plus expect Trp''s like Bidaai or Yeh Rishta Kya Kehlata Hai?

Tujh Sang needs proper promotion.. which Star hasnt done!
Its always promoting Bidaai & Yeh Rishta...!!!
Star plus shouldnt forget the remarkable TRP''s given by Balaji shows from past 8 years!
So it shouldnt treat its Balaji show like this!

This is So Sad!

13 years ago im so glad it isnt going off-air. i watched a few epis is good show. at least it gets a chance.

13 years ago im glad it isnt going off-air. i know all of us gans are upset but you never know this could actually be good for the show!

+ 5
13 years ago i don''t watch this show..just sometimes i watch a few epis. its not a bad show.. give it a chance it just started.

P.S.- My Sister Will Be Really Happy becuz she loves this show..lol..