Imagine and Balaji Telefilms Bandini recently saw a big twist with the death of Maulik's (Shardul Pandit) character, but there is much more to come as far as drama quotient is concerned. 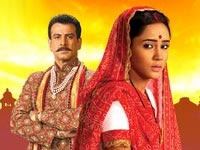 Tonight's episode will see a big revelation wherein the entire Mahiyavanshi family will get to know that Vishal is actually the son of Dharmaraj Mahiyavanshi (Ronit Roy) and Dr. Megha Mehra.

This will create some unrest between Santo (Aasiya Kazi) and DM and Megha will also be shocked when she realizes this bitter truth.

Also tonight's episode would see the entry of a new character as Manish's (Akshay Anand) sister. The role is to be enacted by actress named Ruchi who was earlier seen in Sony TV's Pyar ka Bandhan.

A Little Birdie tells us that, "Ruchi would be enacting the role of Juhi who is a very fun loving girl."

When contacted, Akshay Anand confirmed the news saying, "Yes, Manish's sister would be entering in tonight's episode but can't reveal anything else."

So, it will be interesting to see what major drama the creative's have planned with the character of Juhi in mind.

Aasiya Kazi Is Back In Action But Shoots In Pain

Demigoddess 10 years ago S so tru, dat cute child is being poisioned by a witch, n i dont need 2 name hr 4 hr intro.

Demigoddess 10 years ago Better dey dont show vishal as sanraj's son bcoz if dey do den santu will again bcum wrong 4 hidding such a big reality of hr being prgnent in jail.
So hope 4 best

ramsha_002 10 years ago vishal has to be sanraj's son......otherwise god knows wt will happen to bandini

TOTAL-ROMANTIC 10 years ago We beleive in SAntu & DM..love mor ethan anything else..so we will wait & watch

cuckoo_chand 10 years ago I am really surprised that Ekta is repeating the same old twist as in KZK and KSBKBT where RR means Mr Bajaj and Mihir had extra marital affair and had a daughter and a son respectively. I am feeling sad to see that they are spoiling DM's character in the same way. But DM's character is the role model of many people who is judicious, honest ,intelligent and loyal to his wife. I will stop watching the show if they prove him characterless and disloyal to his wife Santu. Ridiculous.

deejagi 10 years ago I still hope that Vishal is Santu's son. After much drama, that will be revealed. Otherwise there was no need to bring that lady who knew Santu from Jail and who wanted to say something about " what happened in jail............. Lets hope for the best. I don't think the CV's will ruin DM's charecter

romiosugar1 10 years ago Bandini is going beyond my imagination. I thought this boy will be Santu's son to whom she gave a birth when she was in jail, but what is happening now???