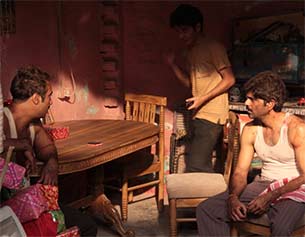 The makers of "Titli" - director Kanu Behl and co-producer Dibakar Banerjee - are confident that the "difficult and exciting" journey of bringing "Titli" to life will bear fruit for them when it is screened at the prestigious Cannes International Film Festival next month.

The movie, about the badlands of Delhi's dystopic underbelly, will be in competition as part of the Un Certain Regard section of the 67th Cannes film gala, to be held May 14-25.

Talking about the film, Behl said "'Titli' is a film about family, roots and the ghosts within our most intimate relationships. It's an extremely personal film. The journey to the core of the film has been a difficult and exciting one and I'm looking forward to it going out into the world."

"Titli" revolves around the volatile relationship between two brothers - one of whom runs away from home to escape his oppressive family but turns to a life of crime.

The film is jointly backed by Yash Raj Films (YRF) and Banerjee. The filmmaker says he holds the success of "Titli" at Cannes as the way forward for Indian cinema.

"A hot new talent, one of India's biggest studios and an independent production house pooled their strengths to present a honest to the core, intense, rooted, yet universal Indian narrative which is not Bollywood but simply world cinema from India," he said of the project.

"This is a proud moment for me and all of us at Dibakar Banerjee Productions and YRF. Kanu Behl's smashing debut will make India proud," he added.