The name Tinnu Anand, needs no introduction in the Bollywood industry! The talented actor and producer, who has essayed lot many prominent roles in Hindi Cinema, will now stage a comeback after many years. 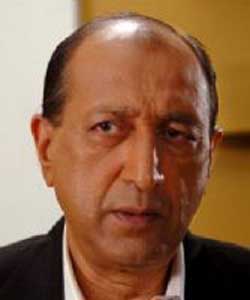 Are you wondering where you have seen the actor on TV? Well, for the uninitiated, Tinu Anand played the role of Mr. Ahluwalia, who wooed Kashish in successful Balaji Telefilms show Kahinn to Hoga. He was also a part of Ekta Kapoor's show Karma.

Our source from the industry says, "Channel and the production house were looking for a big name to play the role of Sri Ram Patil. Tinnu Anand has been roped in, and he is scheduled to start shoot from today."

We hear that the grand ritual of visarjan, during the Ganesh Chaturthi festivity, will lay the platform for Tinu Anand's entry.

Our source further states, "His entry unfolds lot many dark secrets. It will be Aai (Swati Chitnis) who will spot her husband first, but will try her best to keep Dutta unaware of his existence. As per Dutta, he believes that his father is dead. Dutta has a big fear when it comes to the mention of his father's name and this has to do with horrible things that Dutta's father had done to little Dutta 25 years back."

Laagi Tujhse Lagan in the coming episodes promises an interesting and gripping back-story. It is also believed that Dutta's brother is scheduled to enter soon.

When contacted Tinu Anand confirmed, that he plays the lead's father in Laagi Tujhse Lagan but refused to divulge any more details.

What will happen when Dutta comes face to face with his father? What is the mystery behind Sri Ram Patils 25 year old dark past?

To know the answers, keep tuned to Laagi Tujhse Lagan, now airing at the new time slot of 8.30pm on Colors.

Yuvika_15 9 years ago ltl is a wicked shw, and i enjoyed tinu anand's track esp their meeting during the visarjan..bt sadly dp dies al thanks to kala n dutta stil hasnt 4given him

stranger2rose 10 years ago waiting for the father son clash...great track ahead

Even more eager to see more scenes between Naku and him before he gets to meet Dutta.

-Rema- 10 years ago loved that i got to see him in tonight's epi..looks angelic in the white and green kurta.