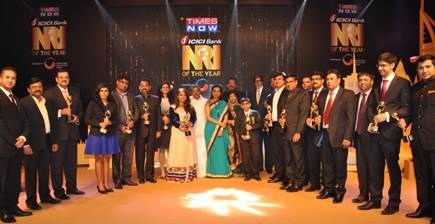 Times Now India's No. 1 news channel with a presence in over 75 countries celebrated the success and achievements of Indians across the world with the announcement of the winners of 'NRI of the Year' awards. The event also marked the presence of Honorable Cabinet Minister for Overseas Indian Affairs- Vayalar Ravi as the chief guest. The ceremony was graced by the presence of Mr. Amitabh Bachchan who was felicitated with India's Global Icon Award.

With their grit and perseverance, Non Resident Indians have achieved tremendous success in various fields in the countries they have chosen to adapt as their homes. Many NRIs are accomplished politicians, scientists, sportsmen, businessmen, professionals and academicians in various countries and NRI of the Year' awards recognize the success of these achievers.