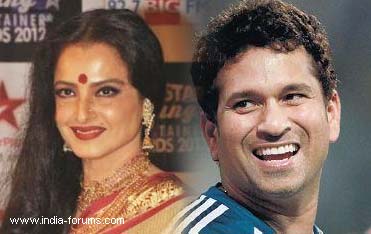 Bollywood diva Rekha and cricket maestro Sachin Tendulkar have been nominated to the Rajya Sabha and the film fraternity has extended its best wishes to them and said good people would do good work.

On Thursday, master blaster Tendulkar, Rekha and businesswoman-social worker Anu Aga were nominated to the Rajya Sabha followed by a stamp of approval from President Pratibha Patil.

Sachin has accepted to be a member of the Rajya Sabha, while Rekha's acceptance is still awaited.

This is what the film fraternity has to say:

Sujoy Ghosh: I am a big Rekhaji fan. She is allowed to do everything. Anything Rekhaji does is fine by me. He (Sachin) is a good hero, man, he should be there.

Chitrangada Singh: According to me, both of them deserve it. Rekhaji is an accomplished actress and she has been maintaining a low profile for a long time. But she is somebody who has so much of grace and she is so accomplished. Sachin, of course, is the pride of the country so it would be great to see him in the parliament.

Filmmaker Nagesh Kukunoor: Awesome! I guess that's a good thing... it's great. I think we need all kinds of different personalities in the Parliament.