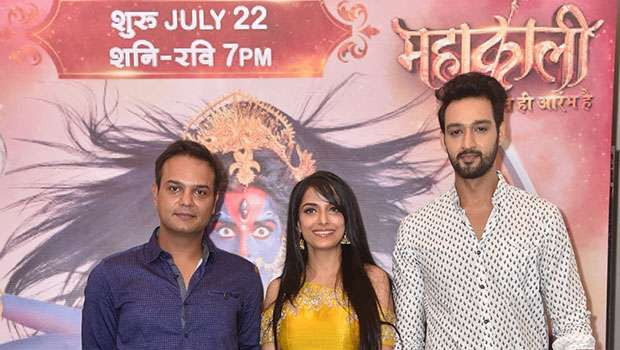 Swastik Productions' next big venture on Colors, Mahakaali is all set to thrill the audience with its brilliant effects. The trailer of the show can surely give goosebumps with the impactful performances of the actors.

Actress, Pooja Sharma will be seen playing the central character of Kaali and Sourabh Raaj Jain will be depicting the role of Lord Shiva for the first time on the small screen, and they both surely justify these terrific characters.

Sourabh along with his look and performance has something more special for his fans on the opening episode of the show. He will be performing the Shiva dance, the 'Tandav' for the first time on TV screens.

He shared with an entertainment portal that Tandav was something that he has not done before on TV. It was a new experience and he thoroughly enjoyed it. In the scene, there was a set of a glacier where he had to perform Tandav. He has really worked hard to play the character of Shiv and hopes that the audience will like him.

.shivashakti 3 years ago This is great news, waiting to see Sourabh Raaj Jain's tandav. This is true, they both really are justifying Shiva kaali characters

Rebalove 3 years ago This show is so different from the other shows, I m eagerly waiting to see my Sourabh as Mahadev and Poo as parvati

madhavi376 3 years ago I love you as Shiva Saurabh, you look amazing and magical in the role. Perfect casting

shritama7 3 years ago Hey Sourabh good to see you back in action with mahakaali. Saw your mahakaali promo on IIFA Award nights, you looked superb

.Armaros 3 years ago Sourabh as Shiva would be a unique and delightful thing to watch, waiting for the epic to begin

..amaya 3 years ago Wow I feel so amazing that Sourabh is a part of this show that too as lead, I am looking forward for this magnum opus

RadhikaBr. 3 years ago Sourabh looking so impressive and amazing as Shiva. I love him so much. Pooja is looking awesome ND fierce as kaali maa

.niharika 3 years ago Wow Sourabh You are looking so handsome as shiva have seen glimpses of you as Shiv and you are just fabulous buoy! GREAT

diwiangel 3 years ago Sourabh raaj Jain you indeed took my breath away as lord Shiva. You are too perfect mann