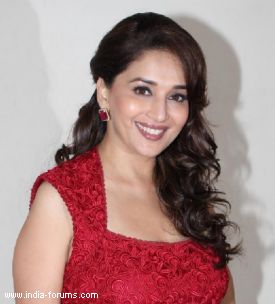 Actress Madhuri Dixit, busy promoting her forthcoming women-centric drama "Dedh Ishqiya", admits that the world is male dominated and it's up to a woman how she makes a mark for herself.

"The whole world is male dominated, not just this industry," she said when asked whether the option gets narrowed down for an actress post-marriage and does she feel that the film industry is male dominated.

"There will be this difference, but it is up to a woman to make a mark for herself and fight for her rights. Woman has to work two times harder than men to prove herself again and again. That's the reality of life," the actress told IANS.

"But whatever you get in return is much more satisfying," added the star of films like "Dil", "Beta" and "Dil To Pagal Hai".

Directed by Abhishek Chaubey, "Dedh Ishqiya" is Madhuri's first full-fledged film in six years and she has teamed up with veteran Naseeruddin Shah in the small-town based thriller.

Talking about Naseer, Madhuri said: "It was not challenging as such, but he is such a wonderful actor that it was delightful to work with him. Besides, each and every scene is written so beautifully that every character looks great."

Arshad Warsi and Huma Qureshi too feature in the movie, which is coming out in January next year.

Even at 46, Madhuri look as beautiful as ever.

When asked about her beauty secret, the mother of two said: "Discipline is the biggest secret. There is no other secret than discipline. My diet, lifestyle, and my habits... I have no bad habits... all these things reflect on your face and body."