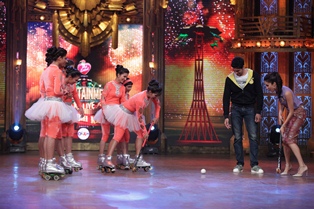 The sets of Sony TV's Entertainment Ke Liye Kuch Bhi Karega turned into a hockey pitch as special guests Siddharth Malhotra and Shraddha Kapoor decided to play hockey on stage. Siddharth Malhotra and Shraddha Kapoor made an appearance on EKLKBK to promote their upcoming flick Ek Villain. Both were completely awestruck by the showcase of talent on the show. They even danced with judge Farah Khan on the song Radha which left the audience asking for more.

This is not all! The pagalpanti reached new heights when a national hockey skating champion group Chak De from Sirsa performed their marvelous act. Inspired by their act, both the actors made their way on stage to play hockey and took a few tips from the champion girls.