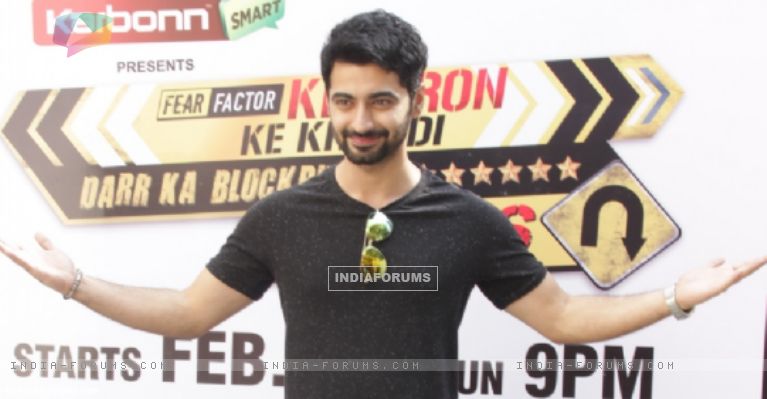 Beintehaa fame Harshad Arora, who recently made his way to Colors' very popular reality show  Khatron Ke Khiladi: Darr Ka Blockbuster Returns to showcase the daring side of him, became the first contestant to get eliminated from the show.

Harshad feels that it was his bad luck that he got eliminated from the show so early but overall, the popular actor who enjoys a good fan following enjoyed his stint in the show.

In  conversation with TellyBuzz, Harshad told us, "It was a great experience. I loved Cape Town and the contestants; they were really good. Shooting with Rohit Shetty has been a great experience. We had a great amount of support and safety crew with us. I think it was my bad luck because I was there in every stunt but it's something which is not in your control. Every time, I used to go first to perform the stunts and others used to make their own strategy by looking at it for their stunts."

So, in your opinion where did you go wrong Harshad? He said, "My key got stuck in the lock and I couldn't open. I can't say that my lock or the key wasn't working. It just got stuck and I wasn't able to open it. It was just my bad luck and I can do nothing about it. Anyone has to go first and it was just me this time. One needs to have a good timing with everything to stay in the game while my timing didn't go well that day."

We wonder what the show has made Harshad learn. He reveals, "I have learnt to garner lots of courage and to be focused. I have discovered so many things about me that I didn't know about myself."

When asked Harshad to define the term 'Fear' after he has taken part in this game reality show, he said, "I don't think that the term 'Fear' exist in my dictionary. Fear is something which you can and you should get over it. You need to overcome your fears."

All the best Harshad!

6 years ago I read this article really late and I'd better like to say something. It was just his bad luck. He had to go first every time and because others could plan their strategies. But it wasn't just only because of that. In d elimination stunt, last stunt of his at KKK, he went second if I am not wrong. He could have planned his strategies too. But simply he lost this time. But no worries, I am sure we'll see u again in some show and waiting for that a lot. I loved to see u KKK and PTKK. Love u frever Harshad! :)

+ 8
6 years ago It was good to see Harshad back on TV with both KKK6 and PTKK, can't wait for his new show to start. All the best Harshad Arora.

6 years ago Ok i am a fan of Harshad but this is too much ...u cant blame whose turn n all it is ...its ur fault u performed worse than a small three yr old kid does...itni bhi show off n arrogance achi nhi hoti hai ...ibe seen many ppl winning kkk stunts evn if they go first ...n y u bringing sanaya In comments here ..she absolutely has nothing to with this ...RIDICULOUS

6 years ago Wishing good luck for your future shows, Harshad Arora. Glad that you enjoyed your short stint in KKK.

6 years ago Harshad,plz do not blame ur luck...ur attitude was lazy.U r not d only 1 who performed first...infact u did not perform first in ur elimination stunt...see d girls...they r mindblowing especially Asha Negi.

+ 2
6 years ago Well it is a sad truth that those who go first are always at a disadvantage since they sort of set the timing that the rest of the contestants will try to beat. It reminds me of last year's contestant, Pooja Gor..the same thing happened to her. But there can only be one winner, so the rest of the contestants will get eliminated too at some point right. It's the journey that counts, and it was a pleasure to see Harshad perform some stunts in KKK6.
Love you Harshad,can't wait to see you in your new show. :)

+ 7
6 years ago You dont have to worry miss.arshi12 ... Your mr.arora is never going to even dream of the height where my aunty is.. .. By the way my aunty won all the awards of her first show mjht and if you count any other show as her first then mr.arora ko bhi koi award nahi mila hai maha dev ke liye. ..or has he?


We are trying mr arora to atleast bring you in top 50 ..your sole reason behind giving this iv. .but tumhare fans chahte hi nahi. ..no wonder you sit all day and bash them. .. Like star like fan and vice versa. ...