Indian Television and Bollywood may have different ideologies, ethics, and effervescence, but the dramatic act of bringing the screen to life with entertainment and engaging the audience in whichever way possible is a shared talent. Often such talent sometimes gets reflected in the actors belonging to these two different mediums, making them seem like almost the same person. Today, BollyCurry brings to you some of these Siamese twins, whose similar acting abilities and sheer devotion towards their art  breaches the fine line that divides these two industries.
Ronit Roy and Amitabh Bachchan 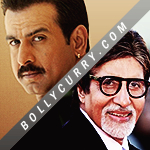 Ronit Roy is one such actor in the television industry whose popularity is no less than any highly rated Bollywood actor. Shining brightly in his breakthrough role of the suave Rishab Bajaj in Kasauti Zindagi Kay, there has been no looking back for Roy since then. Donning some of the best and most remembered characters on television, it was Roy who filled in the shoes of the quintessential son Mihir Virani and gained similar fame as the former actor who left the cult show Kyunki Saas Bhi Kabhi Bahu Thi for greener pastures. Since then Roy has acted in innumerable shows and has done applaud-worthy work on the big screen too. Thus it is no surprise that he is  known as the Big B of television. Mr. Bachchan too rose to fame with his angry young man image with the likes of Deewar and Zanjeer, which depicted his intensity and the debonair essence of his personality. Being a megastar and a legend, his work is unparalleled, but Ronit Roy sure shows glimpses of Big B's dedication, versatility and credibility.
Sakshi Tanwar and Vidya Balan 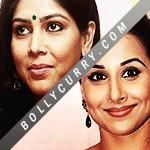 The year 2000 saw a revolution when Ekta Kapoor changed the identity of women in daily soaps. It was the time when Tulsi and Parvati ruled, creating an era of their own. Sakshi Tanwar believes herself to be lucky that she was chosen to be Parvati in Kahaani Ghar Ghar Ki but it was actually the audience who were the luckiest to be bestowed with such an actress. After immense struggle, hard work, and patience, Tanwar gained what she was born for. Playing various women-centric, strong and impactful roles, Tanwar is not only independent and a feminist in real life but chooses to be same in her screen portrayals too. This is something that she shares with the 'female hero' of Bollywood, Vidya Balan. Balan is known for her preference towards such roles where the essence of feminism is highlighted and women are shown in the light of strength and not meekness, such as The Dirty Pictureor Kahaani. Balan's days of struggle are an inspiration to never lose hope and to never disown your belief in your talent and ability to achieve your dreams. Both these actresses have strong screen presence, a unique charm of their own and a subdued sensuality that creates magic whenever they dress up to play another memorable role.
Nia Sharma and Parineeti Chopra 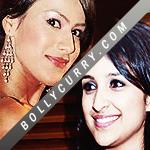 Being eccentric, flamboyant and tomboyish isn't exactly what one goes looking for in actresses, but some rule the hearts of their audiences with these traits like queens. Nia Sharma and Parineeti Chopra are two such actresses who share such a personality, even though belonging to the two ever in-dispute industries. Their portrayals on screen have been power packed, no nonsense and self righteous. Nia Sharma started out her career as a headstrong teenager Anu in Kaali and went on to play a memorable role of a free spirited, optimistic cancer patient in Ek Hazaron Mein Meri Behna Hai whose love for her sister and life was unconditional. Parineeti Chopra, having the advantage of doing more work in the same time span,  has not moved from the path of her chosen covenant. Chopra has broken many stereotypes regarding the necessity of actresses only for the glamor quotient and has delivered some fairly substantial feminist roles in her movies. From the quirky Zoya inIshaqzaade to the crazy genius Meeta in Hasee Toh Phasee, Chopra prefers being the hero with a woman's charm.
Shantanu Maheshwari and Shahid Kapoor 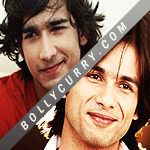 Here are two actors who share a lot in common and then some. Shantanu Maheshwari is young, cute, charming and is the quintessential boy-next-door. If that's not enough to make you drool and swoon, his dancing abilities will surely get you grooving. That's exactly how the stellar Shahid Kapoor started out to rule our hearts. Maheshwari has even been said to be the younger version of Kapoor, something that their dancing skills and slightly similar features help in defining. Maheshwari, though only a show old, has gained immense popularity through it, making him and Dil Dosti Dance a rage amongst the youth. Kapoor too had created similar madness when he had debuted as the adorable Rajiv in Ishq Vishk, going on to become a power actor and a versatile performer.
Dayanand Shetty and Sunny Deol 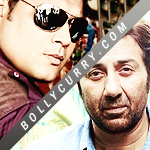 Men and muscles have a bond that the changing eras and evolving styles can never break nor alter in the slightest. Thus some names always emerge and shine in their portrayals of such macho men. Whenever the history of Indian television will be written, the name Daya will be found in golden letters. For the past fourteen years Dayanand Shetty is breaking doors, beating goons, saving innocents, and ruling the hearts of men, women and children alike. Portraying the same role of Senior Inspector Daya in Sony TV's CID for such a long span of time hasn't bored this talented actor nor has the audience tired of the CID squad. But before Daya's popularity resounded so loud, Sunny Deol had established his dhai kilo ka haath with a higher octave. Deol's action movies with his raging anger-filled eyes and ready to strike stance along with the bulging muscles flexing is a trademark that will always be associated with him alone. But similar to Shetty's Daya, Deol too caters an innocence in all his roles that makes you love him even through all the violence.

Being able to act the varied emotions of human psychology effortlessly and with believability is what actors from both industries strive to do and this thirst to capture the audience is what bridges the gap between these different screen sizes. Though television actors may not deliver more variety in the same time span as Bollywood actors owning to the difference in the length of television shows and movies, talent is never overshadowed by such statistics. Let us know what you think of our chosen few and who in your opinion have a twin effect in the comment box below.
Writer: Nabila S.
Editor(s): Shreya S. and Gunia K.
Graphic: Nabila S.