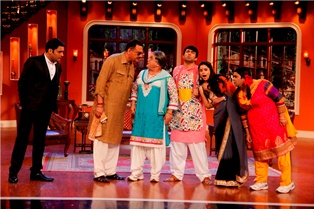 Boman Irani revealed his secret about how he covers up when he forgets his lines - humor! Well, we must say he was on the perfect show then! This was not the only secret that was revealed - Big B even opened up to Kapil Sharma about how he proposed to Jaya Bachchan!

This time around, Daadi received shagun ki pappi from Big B and when Chandan (who plays the servant) brought him chai, there actually was chai in the cup - and it was drunk by Big B!