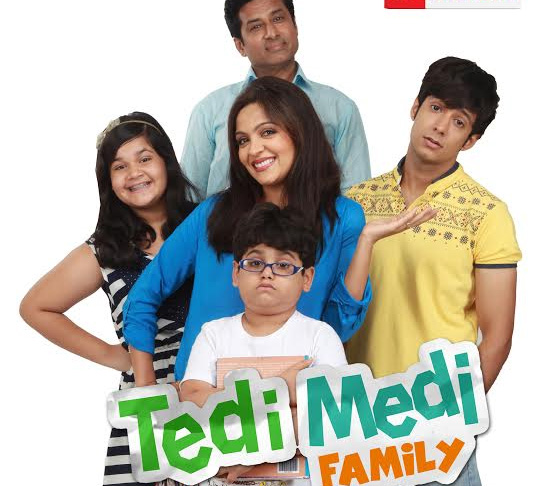 Big Magic, the comedy channel from Reliance Broadcast Network, confirmed to produce the first-ever remake of the hugely popular primetime U.S comedy-series The Middle. Based on the Warner Bros. Television series created by Eileen Heisler & DeAnn Heline (Murphy Brown, How I Met Your Mother), the 24-part Hindi adaptation will be called Tedi Medi Family and will be produced by Bodhi Tree Productions for BIG Magic. The series will premiere Monday 8 June at 8.30pm.
Tedi Medi Family will be produced as a single-camera comedy and follows the daily commotion of raising a family, in the middle of life. Set in a typical family household in Pune, the series will star Saloni Daini, Ami Trivedi and Iqbal Azad together with Sushant Mohindra and Dharmik Joisar.
Mr. Ashwin Padmanabhan, Executive Vice President & Business Head, Reliance Broadcast Network Limited announced the news, "The consistently amusing and relatable scripts for The Middle are a perfect fit with our channel's vision. The characters of a mother, father and three children and their universal journey to just succeed with everyday life means that The Middle has fantastic potential to be recreated for an Indian audience."
Mr. Andrew Zein, Senior Vice President, Creative, Format Development and Sales at Warner Bros. International Television Production said, "The Middle is an extraordinary comedy. This hugely funny and beautifully captured world of every day family life is a concept relatable to family audiences across the globe. Tedi Medi Family has found the perfect home in BIG Magic with its commitment to high quality family comedy."
The series will be supported by a national and comprehensive multi-media marketing campaign that will include television, digital and social media marketing, outdoor, radio promotions, kids channels and extensive promotion through activation and branding.
Mr. Ashwin Padmanabhan added, "In line with our positioning of being a comedy destination, we hope to expand our channel reach and preference. With original content targeted metros and non metros, both long and short formats yet retaining the quality of being episodic, we shall strive to offer nothing but comedy in various ways to our viewers. We try to bring in assortment of shows that shall be attractive to our core target audience, kids for earlier time bands and young males for late nights. Apart from new content, we have refurbished existing content, made changes in production, look, story, scripting and even producers behind shows."
The U.S. version of The Middle is produced by Blackie and Blondie Productions in association with Warner Bros. Television and airs on ABC. The series is distributed globally by Warner Bros. Worldwide Television Distribution, with format sales represented by Warner Bros. International Television Production.