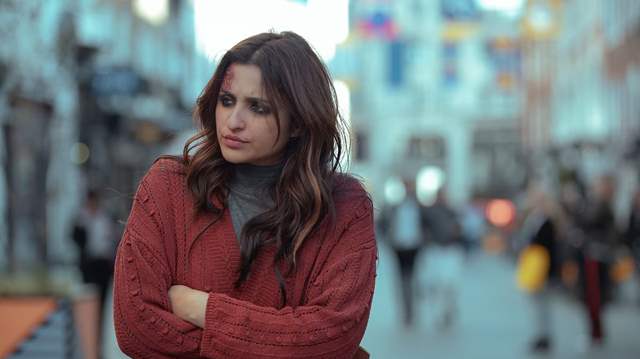 The Girl on the Train features an interesting cast of Parineeti Chopra, Avinash Tiwary, Aditi Rao Hydari, and Kirti Kulhari in pivotal roles. A psychological thriller, the movie has its own highs and lows, and for a movie that already has content that is taken from a book and a Hollywood film, I was glad that I watched it until the end. And for most of the viewers, I think that is a suggestion that would be apt.

Parineeti plays the role of Mira Kapoor, while Avinash plays her husband, Shekhar. Kirti takes on the role of a police officer and Aditi Rao is Nusrat, the girl who seems to have been murdered. After a turn of not so fateful events, the blame for that murder falls on Mira, and while she is confused as to what is going on, she sets out to unveil the truth, which she eventually does. Mira is an alcoholic and is suffering from amnesia, both of which don't play out very well for her.

If I decided to divulge any further, I might end up giving spoilers, hence, we'd rather talk about if or not you should watch the movie. For starters, it is a breath of fresh air to see Parineeti headline the movie, and beautifully so, while everyone else as far as the cast is concerned, does their job perfectly. We hoped to see more of what Kirti's role had to offer, but that's on the makers. She did what she does best, give a great performance. Avinash, as usual, is a treat to watch, while Aditi does leave us wanting for more.

As for the story, though the movie is close to two hours long, I wasn't very happy about the major portions of what I saw in the first half of it. However, with progression in the story, as various layers unraveled themselves, it seemed to get better, and that is what kept me hooked. While it worked out for good in the end, it is necessary for films on the internet to be able to hold the attention of their viewers in the first few minutes.

Directed by Ribhu Dasgupta, he admitted to having Indianized some of the portions for the audience at home, and not simply follow everything from the book and the Hollywood film, and maybe, that did not work for the best after all. At a time and age where we are exposed to global content, we are also more receptive to things that transpire naturally instead of trying to put them into a box.

Overall, the movie had potential, and it does fall flat at certain bits and portions, we can safely say that the cast saves the day!