If Rohit Roy’s elimination on Vodafone Yeh Hai Jalwa last week was a shock for the viewers of the show, wait till you hear who was eliminated this week and you are bound to be astounded. This week to be eliminated from the show is none other than the cute and vivacious dancer Prachi Desai. 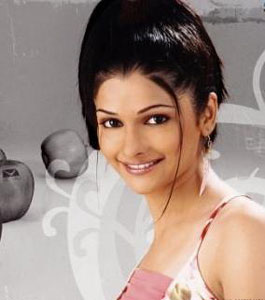 Featured Video
Although Prachi was on cloud nine when she won Jhalak Dikhhla Ja 2 and appeared quite confident that she would do well in this show too, she was quite stunned to hear her name being announced as the contestant who was eliminated this week. It was even more shocking for everyone else as most of the contestants expected Shweta Tiwari to get ousted from the show. In fact Shweta was even heard saying to the host of the show Smriti Irani sometime last week, that it’s Rohit who is out this week, next week it will be my turn. But surprisingly, Shweta was the first one to be in the safe zone.

Shweta gave an amazing performance that got a huge round of applause from both the celebrity guests Hrithik Roshan and Smita Thakeray. And for those who don’t know, Shweta is a die-hard fan of Hrithik Roshan. Now isn’t that some food for thought, a participant who was on the verge of elimination gets in the safe zone just the day her favorite star makes an appearance? Prachi’s performance on the other hand was appreciated by Hrithik, but he did mention that he could not see much of their facial expressions due to the hats they were wearing. Apart from this, Prachi who has always been among the bemisaal teen to get safe found herself in the danger zone this week alongside Hussein and Rakhi while Ronit Roy was in the safe zone with Shweta.

Prachi bid a teary farewell along with her team Masti ki Pathshaala, comprising of college kids.

14 years ago I believe Prachi did a great job, good luck next time Prachi!!!

Best of luck for future Prachi!

+ 3
14 years ago @bubblegum: seriously, you must be a prachi fan. but there are other fans out here as well. and lots of other people think the same for other contestants. Don't take a competetion so hardly. She's out so what. god

anyways Prachi is an awesome dancer. But so is shweta. However i have a feeling sharad should win. Even tho i like pretty much everyone in the show, lol

I agree Prachi wuz one of d best among d rest and she did deserve 2 go 2 d finalz....

14 years ago waaaaaatttttt? oh well no point for me to watch no more

i wanted shweta to go!!!!!!!!! shes soo annoyin and full of herself. even Rakhi is better than dis shweta.

I want Hussain to win now