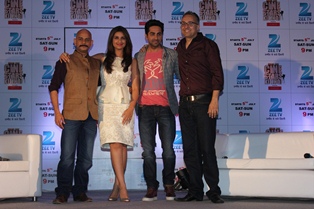 You felt your heart race with excitement when Simran almost missed the train and Raj held out his hand for her ... You danced a jig yourself when you saw Rani overcome her inhibitions and groove on top of the bar in Queen.

You gave your friends a high-five as you stepped out of 3 Idiots because there was so much of the film you'd lived out with them. You felt a twinge in your belly as you relived your first heartbreak when a teary eyed Anjali, on seeing Rahul and Tina together, told her hostel housekeeper "Mera Pehla Pyaar Adhura Reh Gaya!" There's no denying that we, as Indians, experience the entire range of emotions through the world of movies and our beloved cine stars. With films and actors touching practically everyone's lives in one way or the other, Zee TV's next BIG ticket, non-fiction property is bound to touch a chord!

Starting 5th July at 9 PM every Saturday & Sunday on Zee TV is an exciting, new 13 week reality series called India's Best Cine Stars Ki Khoj powered by 'Glam up' - a hunt for the most versatile, talented cine stars who have it in them to light up the silver screen with their acting prowess and charisma! What's more ... it'll be the viewers who will have as much say as the judges in deciding who will be India's next big cinestar. So, with some power-packed histrionics and mind-blowing performances coming your way from some of the most promising acting talent in the country, the show is bound to be your one-stop entertainment shop!

Having concluded a nationwide series of auditions across 18 cities in an attempt to smoke out the most promising acting talent from every nook and corner of the country, Zee TV has signed on Vijay Krishna Acharya aka Victor, the director of Dhoom 3, the highest grossing Bollywood film worldwide and gorgeous actress Sonali Bendre to judge the show. The channel and production houses Essel Vision Pvt Ltd and TrompeL'oiel  Media Pvt Ltd. are considering other A-league actors and renowned directors for the third position on the judges' panel. Parineeti Chopra and Ayushmann Khurana, who embody the picture of India's emerging youth and all its aspirations, have been called upon to guide and inspire the contestants with their own examples in the audition phase. 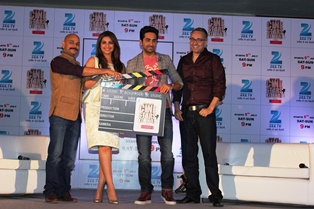 Zee TV Programming Head Namit Sharma said, "Zee TV has always stood for celebrating the talent of India's common man. In 1995, the channel created the mecca of singing talent in the country with Sa Re Ga Ma Pa and introduced the entertainment fraternity to some of its leading singers such as Shreya Ghoshal, Shekhar and Kunal Ganjawala. Dance India Dance, similarly gave hope to a million dance enthusiasts across the country, making stars out of Salman, Shakti Mohan, Dharmesh, Raghav and Prince. After revolutionizing the worlds of singing and dancing, Zee TV is all set to make a similar impact in the world of acting with our exciting reality series India's Best Cinestars Ki Khoj. We have a knack of identifying the right talent, we look forward to an interesting season of this show! The sheer range of performances spanning diverse styles of acting that the audiences will see in the course of the season will make the show a one-stop shop for entertainment."

The show will put its participants through a slew of challenging rounds designed to test their creativity and ability of enacting a variety of different roles. Spanning varied genres such as romance, comedy, drama, dance and action, the contestants will be called upon to prove their versatility, presence of mind, spontaneity and sheer mettle across a number of different acting styles.

About signing on Victor & Sonali as judges, Namit Sharma, Programming Head, Zee TV said, "Victor is the man behind one of the biggest Bollywood hits of all times - Dhoom 3. He has the credits to the story, screenplay and dialogue of the entire Dhoom franchise. He's worked with Mani Ratnam on films like Guru. He's a multi-faceted personality and has worked closely with some of the finest actors of the country. His knack for identifying, grooming and honing acting talent makes him a perfect fit for the show. Sonali is a very attractive, glamorous actress with an impressive body of work. She's been a part of blockbusters such as Sarfarosh and Hum Saath Saath Hain, critically acclaimed films like Zakhm and continues to do some great work in films and television. She has been a much loved judge of our successful children's acting hunt show India's Best Dramebaaz' and we're extremely pleased to continue this association. We'll soon announce a third judge!"

The show presents the talented youth of the country with a golden opportunity to have an interface with some of Bollywood's most renowned film makers, actors, choreographers and be groomed by them. About bringing Parineeti and Ayushmann on board, Namit Sharma adds, "We've roped in a number of achievers from the film fraternity, who've made a distinct mark for themselves, to be a part of the selection and grooming process of our contestants. We're happy to have Parineeti & Ayushman join us on India's Best Cinestars Ki Khoj in the audition phase. This will take our contestants' exposure to the real world of films to the next level. Parineeti's journey from being a PR consultant and an aspiring investment banker to a leading cinestar is remarkable to say the least. Ayushmann, a rank outsider with no film connections, has made it big entirely on the merit of his sheer talent. His versatility encompasses everything from singing and anchoring to acting. The insights they can share will add immense value to the learning process of our budding Cinestars."