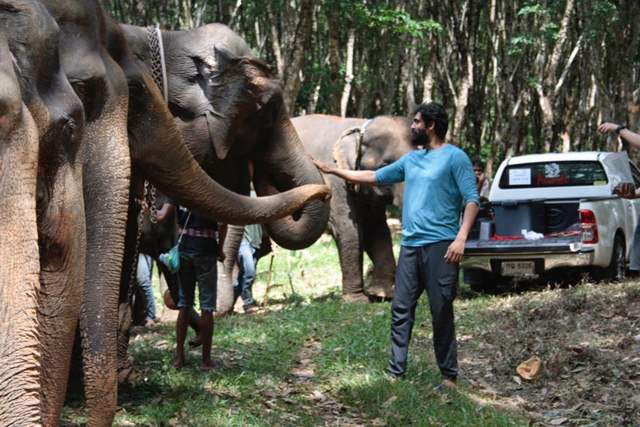 Rana Daggubati feels blessed to have gotten the opportunity to work with elephants so closely, in the lap of nature in the deep jungles across Kerala and in Thailand during the filming of Eros International's, Haathi Mere Saathi.

The experience has changed him forever as a person, learning so much from nature, especially the elephants. There's so much to learn from these gentle giants who not just give back to the eco-system but are also a fine example of loyalty and friendship.

The trilingual is directed by Prabu Solomon, an expert on wildlife. Rana plays the protagonist in this adventure drama also starring Pulkit Samrat, Shriya Pilgaonkar and Zoya Hussain.

Speaking about working so closely with elephants, Rana said,

I've learnt so much by living in the forest, so close to nature and wildlife. They, especially the elephants, teach us to give back to this planet in every way possible, which we humans have forgotten somewhere down the line. This experience has changed me forever as a person.

Haathi Mere Saathi is a story inspired by multiple events and traces the narrative of a man (Rana Daggubati), who spends most of his life in the jungle, dedicated to protecting the ecosystem. 2021's first trilingual film, will release as Aranya in Telegu and as Kaadan in Tamil.

The film is produced by Eros Motion Pictures, a division of Eros STX Global Corporation, an established leader in the Indian film industry with a track record of over 40 years.

So get ready to find out what makes Rana Daggubati feel in awe of the gentle giants from the trilingual Haathi Mere Saathi, releasing on 26th March in theatres near you.

1 months ago I respectfully request that you read up on the lives of captive elephants. It is pure torture. They are chained and forced for stand in the same spot like they are some statues. They get no exercise and develop severe foot rot and other diseases - mahouts paint black paint over their wounds. Elephants deserve to be free roaming worth their herds. Please do not encourage torture of animals for your entertainment. The ‘baby’ elephant in the original Haathi merey Saathi’ died shortly after the movie was released.