View Profile
When director Divya Khosla Kumar got on to research to direct her music album Tere Naal Nachna after her Pankaj Udhas and Aagam Kumar Nigam videos, little did she realise that her ambition would bind her to a cause of creating an awareness to control reckless road accidents.

The director who shot into fame for her anti-piracy video where she egged on people to buy original music was shocked at the findings. "I was merely surfing the net to check out the kind of bikes youngsters today fancy so 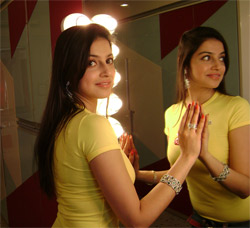 Featured Video
that we could create a similar feel in the album. And I was shocked to read that India leads in road accident deaths according to a BBC report. Reckless driving causing road accidents and deaths of not just individuals but families with over one lakh Indians dying due to this man-made epidemic was simply too much to digest," shares Divya.

"It is estimated that India loses three per cent of its GDP to road crashes every year, and one study found that 70 per cent of families who lose their main wage earner in a traffic accident and subsequently fall below the poverty line," adds Divya who wants youngsters to come up and become more responsible when it comes to driving. While her video is a foot-tapping youthful entertainer, Divya feels the need for a movement for safe driving, something that will be an eye-opener. "I would like to, as a citizen, share my findings with Mumbaiites, so that we become more aware and do our bit as individuals. The least we can do is to not drive when we drink, and do not let a friend who has had a drink drive when he thinks he is "in control". Most accidents happen due to this," elaborates Divya who shares her husband music mogul Bhushan Kumar's passion for cars. "Whenever we go abroad on holidays, we take a vehicle and go on drive for hours," she says. "I simply love long drives but it is important to be a 'responsible driver' at the same time."

Divya is looking at currently creating a public awareness jingle with a message to youngsters. "I aim for it to be catchy musical and infotaining," says Divya who plans to direct her film the coming year. Currently, the film is still in its scripting stages. Looking at her passion for direction and the cause of safe driving, it looks like the drive in Divya will surely take her places.