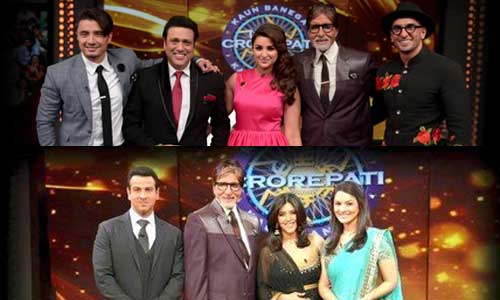 Sony TV's Kaun Banega Crorepati 8 is just on the verge of ending and for its grand finale episode, viewers will get to see the star cast of Kill Dil i.e. Ali Zafar, Pareeniti Chopra, Govinda and Ranveer Singh. The show shot its last with the cast of Kill Dil yesterday.
The cast won a cash prize of 12 Lakh rupees and the same cash amount was given as charity to Prime Minister's Relief Fund for the development of property loss in Jammu and Kashmir floods.
Besides these, the cast of Balaji Telefilms' upcoming show Itna Karo Na Mujhe Pyaar on Sony TV too appeared on the sets.

The lead actors of the show Ronit Roy and Pallavi Kulkarni will be seen on the set along with the producer Ekta Kapoor. They are coming for the grand finale but not to play the game but will  be seen performing on the set.

6 years ago Itna karo na mujhe pyar will be my favourite show. Palvi kulkarni waiting for this show