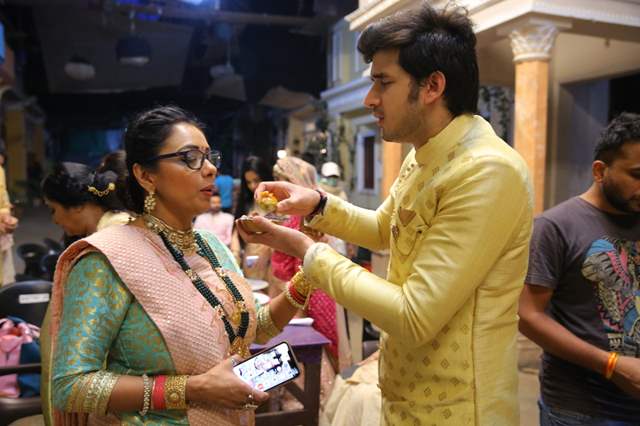 The onscreen mother son duo, Sudhanshu Pandey and Alpana Buch, treated the cast and crew of popular show "Anupamaa" with some mouth-watering street food. There were all kinds of delicious street foods from pani puri to ragda patties and even chaat. Everyone including Rupali Ganguly, Jasveer Kaur, Nidhi Shah, Tassnim Sheikh, Paras Kalnawat, Muskaan Bamne, and even the director Romesh Kalra enjoyed the treat.

The show, produced by Rajan Shahi and his mother Deepa Shahi, is topping the TRP charts. Since they were shooting a wedding scene at the time, the entire cast and crew was present to relish the feast.

Sudhanshu aka Vanraj Shah says,  ''The set of Anupamaa is always vibrant, things like getting food from outside or having a live food station on set keeps happening. Alpana Buch, who plays my onscreen mom, was planning a panipuri party. I suggested that we should do a street food party on set for the entire crew of Anupamaa. She liked the idea and both of us  threw the party. Obviously the entire team of Anupamaa enjoyed the food. Food evokes emotions that always brings us together.”

Interestingly, Sudhanshu also lost a bet a few months back and treated the crew with pizzas. He adds, ''Yes last time I lost a bet and I had ordered pizza for the team, though I still believe that I had not lost the bet. But honestly, the team of Anupmaa is very special to me and it’s a beautiful feeling to see people eating and bonding together.”

Well, we could also use a nice treat, couldn't we?