Soap queen Ekta Kapoor's love-hate relationship with STAR network continues. The latest is that Star Plus has asked Balaji Telefilms to end Tere Liye. The 10 pm slot will now be taken over by Swastik Production's Navya in the first week of April. Vivek Bahl, Executive Creative Director, Star India will be co-producing this show. 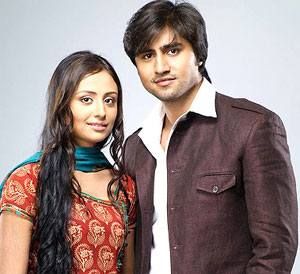 A highly placed source confirmed that Tere Liye has indeed been given the marching orders.

Though Ekta Kapoor denied any such move, and in her reply via text message stated, "When is it ending! How come I don't know? Maybe you know more than me".

While the industry is wondering why Tere Liye is being closed in spite of doing consistently well  with a  good rating (3.5), it appears that old tensions between Ekta and Star have resurfaced. This theory gains credence with the fact that Balaji is making three new shows, but none of them are for Star.

Ekta however rubbished any clash with the channel by saying "Things are great between us".

Our source further adds, "The channel had first planned 14th March as the last airing date for Tere Liye, but then extended it by a couple of weeks. The reason for this might be that they did not want to launch Navya during the finale phase of ICC Cricket World Cup 2011. It is a different matter that the above new youth based show will have to deal with IPL (Indian Premier League) anyways".

Geetanjali Tikekar who plays the character of Nilanjana Ganguly denies any official knowledge of her show going off air saying "Normally we actors are always the last to know. We are doing well and the team even won an award at the STAR Parivaar event in Macau".

Lead actor Harshad Chopra also has no clue. He added, "If it does go, then the fore sightedness on part of the channel may have played a part in the decision. They want to end shows before the audience gets tired of it. Did Bidaai too not end on a similar high note?".

With this, the countdown for the closure of Tere Liye begins…

+ 2
9 years ago Anupriya you are the best angel and you will remain be the best. Missing harshiya-the most adorable and magical couple. You were fab as taani. Missing my teekhi mishthi.
Telly buzz we want more articles and interviews of our APK.
Navya is the worst and too boring.

mahiharshiya 9 years ago want 2 see u back anupriya with harshad!!!! just luv ur acting nd yes the best part HARSHIYAA ROXXX!!!!!
the hottest couple ever

HarshIyaForever 9 years ago Missing you HarshIya!
Come back sooon please =)

TL will always remain the BEST

+ 2
9 years ago Anupriya Means Versatrility, Talent, Beauty, hardworking, Happy, Caring and Down to Earth .We can Say in One Line:- u r the best... God Bless You

Harshiya is the best. The worst show on television is Navya and the best show is Tere Liye.