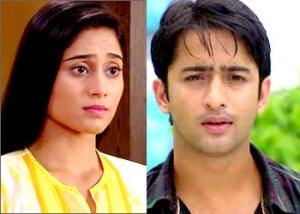 Last episode of Siddharth Tiwary's Navya on Star Plus' saw Anant's family spotting Navya (Soumya Seth) and her friends along with Ananth (Shaheer Sheikh) and Ranbir (Rehan Sayed) loitering around in the night.

Though it was a prank played by Anant and Ranbir on Navya, it came out as a bad impression in front of Anant's family which will lead to hardcore tension between Navya and Anant in the future.

This might even strain their marriage and create vast differences.A source informs, "As of now Baba and Dadi have seen Navya lingering in the night which will make them rethink about their marriage. But as the families are ready to get them married, it is a hard task for Baba to break the relation. Therefore Baba will keep a condition in front of Navya's family so that they themselves take the proposal back. And on the other hand even if Navya gets married to Anant its better to unite them as soon as possible because of their behaviour."

Emphasizing on the condition, the source states, "Seeing Navya's financial condition, Baba will put the condition of getting them married within a month or breaking the relationship."

Although we hear that Navya's family will succumb to the conditions which will indeed lead to Anant and Navya's wedding.

We tried contacted Soumya Seth and she asserts, " Yes, baba will put a condition but I can't divulge any further details."

We are sure that this track will definitely keep the audience wanting for more!

mehar 8 years ago Enjoy watching Navya ,SHaheer and Soumya,keep up the good work

sakshisharma 8 years ago oh please...after a good nice track, making the viewers happy plz dont change it now...
i really don;t like it...i just want anant and navya to be one quik as possible without ny tentions from either side of the family...

ok guyz, this might b a litle weird but i have a feeling that the track is going to lead towards the track which was seen in the film life partner...the love marriage and adjusting into a joint family...

unknown2341 8 years ago Pls cv's dont want no more rona dhona track...no marriage now...they want to complete their studies and they r now immature and not able to handle this relationship...

TonsOfWishes 8 years ago OMG... what are the CVs upto?

so more rona dhona in store for us

piya2025 8 years ago why the CV's are all up for making the show/concept look stupid & Anant,his harkaat is as such that If I were navya I'd not have taken the risk of marring him,Familly toh hai hi full of disgusting ppl..He is behaving so child-like _ he gets so imfluenced by his familly like a lil kid gets angry at his parents but when they gives him a chocholate he just loves his parents..urrggh! Dont know from which angle this show is related to any youngstar's life. :S

Delnaaz Irani speaks about entering Choti Sarrdarrni, her ...
33 minutes ago

Madhrima Tulli & Ssharad Malhotra starrer “Pasta” gets an ...
52 minutes ago