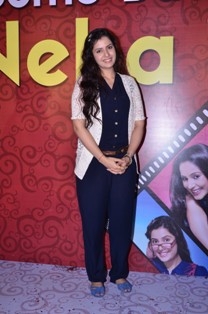 Smriti Kalra has been entertaining the audience with her performances since her debut in 2009. With every show the actress has showcased her acting prowess and versatility. While In 12/24 Karol Bagh, the actress essayed a character much older than her real age, while in Suvreen Guggal, she played a young college girl in her teens. Now with the launch of Itti Si Khushi on Sony Entertainment Television, she is all set to wow her audience all over again!
In the show, Smriti will be seen playing the role of a 26 year old girl with the heart and innocence of a 14 year old. Her character will be seen coming out of coma after 12 years after meeting an accident at the age of 14. Speaking about her choice of roles, Smriti says, "I have always wanted to experiment and ensure that all the characters I portray are different from each other. As an actor I want to try different roles and surprise my audience. When I heard the character of Neha, I just knew I had to do it as there is a lot of Neha in me too."

6 years ago well said! she is the best actress on tellywood. love you Smriti Kalra. cant wait for Itti Si Khushi.

+ 2
6 years ago Agreed Smriti Kalra is a versatile actress she played both characters of Simi and Suvreen so amazingly... Looking forward too see you as Neha

skk5 6 years ago She definitely is very versatile . No other actor on screen has performed in such variety of roles . It also indicate even industry has faith in skill & capability , Promo's of Itti si Khushi showcase her talent, well done Smriti . keep it up. All the best for new show

6 years ago Yes Smriti Kalra is truely a very versatile actress i have seen on Indian Televesion.
We welcome you back Smriti and we are sure this time again you gonna surprise us.

6 years ago Yes smriti kalra is indeed a versatile n an amazing actress untill now ever i have seen on TV. she always chooses sm unique characters whlie doing any show..
All the best smriti kalra di. I am ur big big fan

6 years ago Its indeed true that Smiriti kalra is the most versatile actress on tv.Be it Simi sethi of karol bagh or Suvreen guggal both absolutely poles apart roles.
Plus a charming and grounded person she is just love her very much.Now waiting to see her as Neha in Itti si khushi.

9 years ago In Mausam everyone can clearly see what a wonderful actor he is. His expression are to die for! Definitelyy one of the finest actors we have today!

+ 4
9 years ago Yea his million-dollar smile that can make any girl skip a heartbeat :D
Nice interview ... He has indeed transformed from a totally raw actor to one of the finest actors today ... God bless him