Following the Hindu belief that immersion of ashes at this spot is the way of achieving salvation, Bachchan performed an hour-long ritual from a motor-boat anchored in the middle of the holy confluence.

The ritual was carried out amidst tight security by a battery of priests belonging to Prayagwal Mahasabha, the most 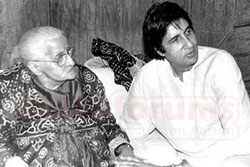 The priests were left high and dry as Bachchan apparently forgot to offer them their usual offerings or fees.

However, Prayagwal Mahasabha general secretary Rajendra Paliwal said, 'So what if he forgot, Amitabh Bachchan and his family are more important to us than money; and in any case, his mother was daughter-in-law of Prayag (the old name of Allahabad), so it was a very special ritual for us.'

Earlier, the Bachchan family - with Jaya Bachchan, son Abhishek and daughter-in-law Aishwarya - arrived here by a chartered plane and were driven to the Quila Ghat in a special private bus in the afternoon.

Samajwadi Party (SP) general secretary and family friend Amar Singh accompanied them after they were received by local SP leaders.