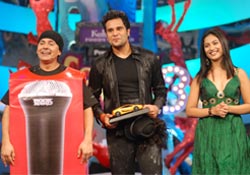 According to our source "The round one of the finale was graced by the very popular Jackie Shroff. Jaggu Dada had a whale of time as he enjoyed most of the performances. In the first round it was Smita Singh, Rajeev Thakur and Saloni who got a standing ovation, but they lost out in round two as their script was very weak. On the other hand Sharad Kelkar, Bharti Singh and Paresh Ganatra remained very consistent throughout the performance.

"Though many felt Sharad and his team should have been the worthy winners, it was the team of Krushna Abhishek, Sudesh Lahiri and Mellisa Pais who were declared winners. Sharad Kelkar and his team were the first runner up while Smita Singh and her team were declared as second runner up", imforms our source.

The Grand finale of Comedy Circus Teen Ka Tadka will be aired on 30th January at 9.00 pm on Sony Entertainment Television (Sony TV)

shamil 10 years ago bharti, sharad & paresh deserved to win. Their acts were better than those of the "winning jodi"

desicrowd 10 years ago Nah not agian....they got them in the middle and then they made them win it...full time they were favored...I am irritated with this Krushna guy...Archana's so called most talented guy on earth...

dimpu_usa 10 years ago There is no use watching comedy specially when we knew right from start that Krishna will win, they got eliminated, came back and ad usual the judges favor them the most. I hate this Jodi specially cuz of their vulgar jokes. Bhartis team is much better and original.

Shaina_b 10 years ago I knew it!!!As long as Krushna is participating they will always make him win!!!!There isn't any possibility that any one else will win!!!!!

Whenever they got low marks there was no elimination!!!!

Krushna's team did not deserve it at all!!!!!They are too repeatative!!!!