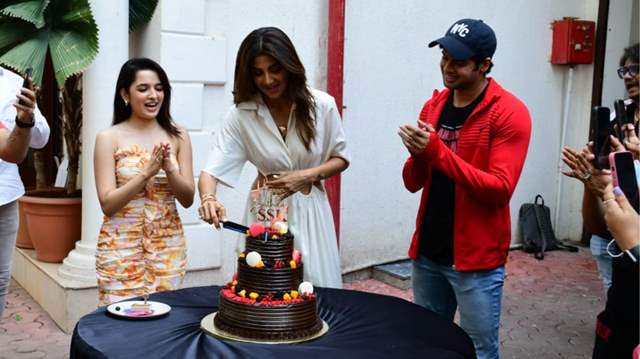 Today, the stunning Shilpa Shetty is celebrating her birthday and since morning greetings and wishes have been pouring out for the actress frpom all around the world and fans cant keep calm. Currently, the actress is revving up for the release of his upcoming film Nikamma.

Recently, the cast members of her team, Abhimanyu Dassani and Shirley Sethia along with a group of Shilpa's fans gathered outside her residence and performed a flashmob taking her aback. Pictures and videos of the same have been  causing a stir on the internet.

In the pictures, we can see Shilpa Shetty's reaction who is seen standing in her balcony all perplexed and flabbergasted as the dancers suddenly appear sand star performing. Later after the performance, the Dhadkan actress came down and also cut the cake with her fans and the Nikamma stars. Shilpa was seen dressed in a white collar dress with cuts near her waist, giving it an edgy look.

Her mother was also a part of the celebrations as seen in the pictures and videos.

Talking about the film, Nikamma is touted to be an action-comedy film which features Abhimanyu Dassani, Shirley Setia and Shilpa Shetty. It is helmed by Sabbir Khan and backed by Shabbir Khan Films and Sony Pictures India. It is a  remake of 2017 Telugu film Middle Class Abbayi which starred Nani Ghanta. The film will hit the big screens on 17th June.