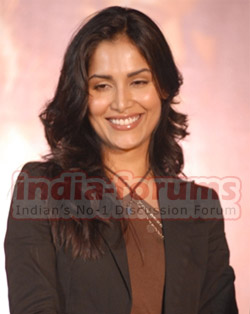 The elegant Tapur Chatterjee happened to be the first female celebrity and only the second to be voted out of Sony’s ‘Jhalak Dikhhla Jaa’ but it has done nothing to change her ever smiling demeanor.  In fact the way she bowed out from the show so gracefully leaving anchor Mona Singh actually teary eyed and judge Urmila Matondkar openly expressing grief and shock at her ouster, proves yet again that she is an epitome of class. As for Shiamak Davar, he didn’t need to say anything, his expressions said it all.

“I am sad but then I am also happy that I could come this far, thanks to the support of my well wishers. It was a great experience. I enjoyed this completely new experience. I loved the appreciation. Staying back or going was not in my hands,” quips the supermodel. Tapur might not have sizzled in her debut performance but then her second and third performances rocked. So was it the fact the other contestants are from more commonly known fields( TV, films, sports etc) and she being from a field only still acquainted to the elite few, affect her status when it came to the votes?

Explains the Bengali beauty,“The others are very well known in their respective professions, the public know them very well. I come from a very different market. I was kind of new to them. Actually people need time to know somebody a little more.” Unfortunately this was not the case in the show as Tapur was seen for just about three weeks on TV screens. Now she will only be back for the grand finale sometime in December.

Interestingly Tapur and her twin sister Tupur (who is 12 minutes younger than her) have been named after the famous Bengali poem by Ravindra Nath Tagore ‘Brishti porey tapur tupur" which means 'Pitter-patter falls the rain.' Her moves on the dance floor were no less poetic. Tapur was improving fast and she managed to shine through(not to forget her goodbye performance). That’s why the voting out seemed to be even more surprising. She says, “Actually I loved my third performance the most. I was doing a topple for the first time and it was all new to me, though everybody applauded the second performance the most.”  Really it’s sad that the audience didn’t wait to know her enough!

Very few know that Tapur is the granddaughter of legendary filmmaker, the late Hrishikesh
Featured Video 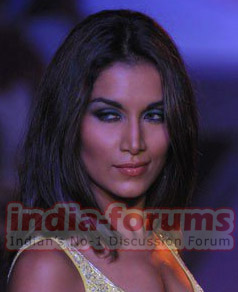 Mukherjee. Apart from such an illustrious background, people now have come to know about her dancing skills. So are movies on the cards? “ “I believe in the saying ‘never say never’. I did get offers in the past. But then they have to be interesting enough.  If at all it happens now, it should have a strong story base. It would be something with a strong Indian background like ‘Parineeta’ or maybe like ‘Black’. As for my grandfather’s movies I love his all his movies. ‘Chupke Chupke’, ‘Abhimaan’ and Gol Maal are special for various reasons.

Any dream directors she wants to work with? ‘Oh there are so many of them who are doing great work. It will be unfair to single out anyone,” she retorts . But TV doesn’t really interest her. Serials are a strict no no but will she ever turn host, if it’s something interesting? “I can’t say that now. Maybe, if it’s worthwhile.”

Tapur is somebody who has achieved it all on her own steam, without really piggy backing on anyone, not even her grandpa’s name. It won’t be understatement to say that this trait is very unlike some of her co contestants on the show.  Now who doesn’t know about serial actors nurturing big Bollywood dreams and same goes for the ones on ‘Jhalak Dikhhla Jaa’ who have taken the show as a ladder. Even though they hardly make it there, they look for or have a strong backing in the form of a Godfather and the case is not  different here. Tapur on the other hand was and is on her own. If this girl isn’t a winner, who is?