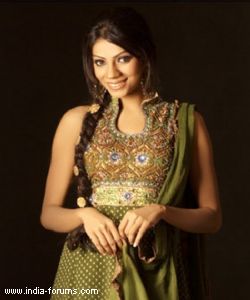 The coming episodes of Sony TV's Saas Bina Sasuraal  will see an interesting twist in the life of Pracheen (Srman Jain) when cupid strikes him from his college.

Tanvi Thakkar who is presently seen in Imagine's Baba Aiso Varr Dhundo is all set to enter the life of Pracheen as his love interest.

A source says, "Tanvi will essay the role of Riya, the premier girl of the college who Pracheen will fall for. The role is a cameo that will be present for three months."

Talking about the track, the source says, " Pracheen falls for the beauty and attitude of the girl and will start dating each other. This will lead to a love triangle Pracheen, Riya and Dimple (Ketaki Chitale). This track will be on the lines of Bollywood blockbuster Jo Jeeta Wahi Sikander."

We contacted Tanvi and she said, "Yes, I am doing the show and the character is very interesting. The show is really good and that's the reason I accepted the show amidst my ill health."

Tanvi will start her shoot tomorrow and her entry will be on air in the coming episodes of Saas Bina Sasuraal.

xxMATSxx 9 years ago AWESOME!!!!! THANK YOU SOO MUCH!!! so excited!!1 Excactly what i wanted to happen. And even better, I LOVED JJWS movie!!!!

shivani003 9 years ago Hmmm so Pracheen is gonna pretend to be rich and Dimple will help him woo Tanvi... Well lets see how eventually Pracheen n Dimple end up together...

rekhavy 9 years ago both sbs and balh are good shows...like them a lot

bbbccc 9 years ago SBS has never disappointed me, so excited eventhough I don't like this girl. She kind of looks old against Prachin but lets see...

-Preeti- 9 years ago OMG ... this would be Fun to watch. So we have real good tracks coming up in the Show ... yayikes

AnotherAdmirer 9 years ago Interesting, though am waiting for Ved-Nikita track...!! hehe

jassie_17 9 years ago seriously???Gosh...yeahh i was kinda hoping for Vedji and Nitika's love story to kickstart but guess we can get to see that in short bursts!!

kooliio 9 years ago I was waiting for ved and nitika's love track to start...

Shabana Azmi speaks about recovering from her Devastating ...
11 minutes ago

Who is AK in Sushant's Unseen Video that has Surfaced? Watch ...
15 minutes ago

No Bail for Rhea Chakraborty and Showik Chakraborty? Bombay ...
51 minutes ago