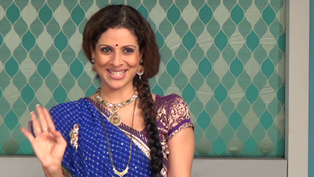 Zee TV and Hats Off Productions' Bh Se Bhade is on a roll with various new characters becoming a part of the show week after week. Entering the show from February 1st, Tanaaz Currim Irani will be seen as a typical Gujarati house wife, Mridula.

Playing a kleptomaniac in the show, Mridula has a habit of stealing things and utilizing them for her own good. A little on the crude side, she is quite the opposite of her sister-in-law - Sushma Bhade, played by Suchita Trivedi Shuttling between Dubai and Mumbai to manage her business, and previously seen on a few reality shows, Tanaaz is back to doing what she does best - comedy! Having a steady career in Bollywood and having acted in various fiction shows, Tanaaz has been missing from the scene for quite long.

Making a comeback with Bh Se Bhade, Tanaaz said, "I am glad to be back and have a platform like Hats Off and Zee TV. I had been away from television for a few years now since my kid was too young but now that she is all grown up, I am sure I will be able to manage this. I watched a few episodes of Bh Se Bhade and I am sure very soon my character will become a household name."

Happy on having Tanaaz join the cast, producer J D Majethia said, "She is known for her brilliant comic timing. We wanted a feisty woman to play the role of Mridula, who is exactly opposite of the meek and demure, Sushma (Suchita Trivedi). As soon as we had etched this character, I knew I wanted Tanaaz to play it. Her versatility is what works for a show like ours. We're glad she decided to come out of her shell and accept the role."

Giving it all it takes, Tanaaz learnt to ride an auto rickshaw for her very first sequence. Despite a few quick lessons, during the first take when she took the driver's seat, little did she realize that the rickshaw driver had left the drive in reverse' and so off went the rickshaw shooting away in the reverse direction! Not giving in to the temptation of a having a duplicate shoot the sequence instead of her, she bucked up and in the second take itself managed to get it right and was shooting with full gusto, later even chasing after a BEST bus!

.StarryPhoenix 9 years ago i like Nauheed & Shenaz! btw, Happy V-day to all <3